Turkey to Begin Drilling Around Cyprus 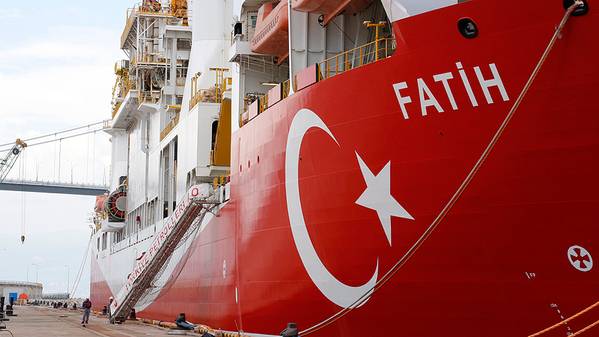 Turkey will begin drilling for resources around Cyprus, Foreign Minister Mevlut Cavusoglu said on Friday, a move that could create tensions with neighboring Cyprus and Greece over ownership of natural resources.

Attempts to tap gas and oil in the eastern Mediterranean have caused friction between Athens and Ankara.

Turkey and the internationally recognized Greek Cypriot government in Cyprus have overlapping claims of jurisdiction for offshore oil and gas research in the eastern Mediterranean, a region thought to be rich in natural gas.

Turkey will start drilling around Cyprus because the Greek Cypriot government did not listen to Ankara's suggestions to ensure the rights of Turkish Cypriots, Cavusoglu said during an interview following a meeting with the Turkish Cypriot leader Mustafa Akinci.

"Our second platform is coming in February. We were going to send it to the Black Sea, now we are sending it to the Cyprus area," Cavusoglu said.

"Our drill ship Fatih is currently in the Alanya-1 area, its work there will be done in March. We are shifting that to the south too," he added.

He did not specify whether Turkey would drill for oil or natural gas.

Turkey launched its first drill ship Fatih in October to drill off the coast of Turkey's southern Antalya province and had said a second ship that it purchased would operate in the Black Sea.

Breakaway north Cyprus, which is supported by Turkey, says any offshore wealth also belongs to them, as partners in the establishment of the Republic of Cyprus in 1960.

Greek Cypriots, who run the island's internationally recognized government, say any future benefits of gas finds will eventually be shared by all Cypriots.

Cavusoglu said Ankara would not be satisfied by such statements.

The island was split in 1974 after a Turkish invasion triggered by a brief Greek-inspired coup. Countless peacemaking endeavors have failed, and offshore wealth has increasingly complicated peace negotiations even though Greek Cypriots say that matter is not up for discussion.