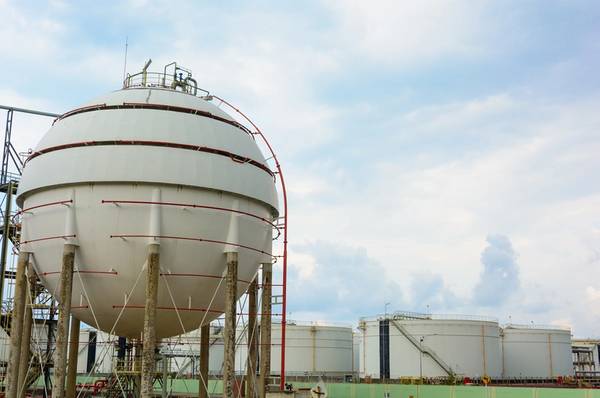 © chalermchai k/ Adobe Stock
Falling industrial demand and mild weather have turned China's energy giants into sellers of liquefied natural gas (LNG) in Asia for the first time since last year's massive import spree.
Chinese players were on the receiving end of last year's doubling of LNG prices, largely driven by their rapid shift to gas to combat coal smog as well as elevated regional demand for the fuel.
Although a CNOOC executive last week warned producers not to expect a similar payday in 2018, industry executives said they were not unduly concerned by the blip, saying Chinese demand would continue to grow.
However, some traders were caught off guard by the speed of the demand downturn in the run-up to and aftermath of China's Lunar New Year holidays last month, with three cargoes now on offer.
LNG producer profits soared in tandem with spot prices hitting three-year highs above $11 per mmBtu as China's buying spree peaked in December and January.
But a slump set in as milder weather settled over Japan and other major gas consumers in the region and expectations that Chinese buyers returning from the Lunar New Year break would take up the slack fell through.
Plunging demand turned national oil companies (NOCs) like CNOOC, Sinopec and PetroChina into sellers and they are now offering cargoes for late March and April delivery, trade sources said. Meanwhile, spot LNG prices have sunk to the mid $8 per mmBtu <LNG-AS> range.
"The heating season is almost over and some buyers are getting more balanced, including small buyers so yes, Chinese companies have cargoes for offer," a source at one said.
LNG industry executives are unfazed, despite China's role in reviving global cargo trade and boosting prices.
"We expect LNG demand to continue to grow in China this year," Royal Dutch Shell's Steve Hill said on Friday, citing the government's commitment to cutting back on coal.
The brunt of China's 2017 coal-to-gas programme has yet to play through as the delayed effect of last year's switching meant the impact on demand was limited to six weeks, said Hill, who is responsible for Shell's global LNG and trading business.
However, Zheng Hongtao, vice president of trading at CNOOC Gas and Power, said LNG producers ought to rethink bullish 2018 forecasts and take into account factors such as pipeline outages, which drove up China's LNG demand this winter.
Daily shortfalls in piped gas deliveries from central Asia meant CNOOC and CNPC had to purchase 2-3 million tonnes of LNG equivalent supply via LNG spot markets, Hongtao said.
"Without these emergent 2-3 million tonnes what would have been the (spot LNG) price?" he said.
Throttling Back
After exceeding quotas for converting households from coal to gas, Chinese provinces have plans to moderate the pace of conversions, which alongside ambitious targets to boost domestic gas output, could take pressure off LNG imports.
Stabilising pipeline imports would also add relief.
The frenzied build-out of gas demand last year sparked criticism of the central government after supply shortages ensued, prices rose and residents froze, making a repeat highly unlikely, LNG industry sources acknowledge.
Hongtao said efforts to contain LNG demand are underway.
"From one terminal in China we sold 400 LNG truck-loads, or 8,000 tonnes of LNG per day (this winter)."
"Over the Chinese New Year we sold 80 trucks, or 1,600 tonnes per day... now it has recovered but is still less than half," he said last week, adding it showed the changeability of China's gas market.
Reporting by Oleg Vukmanovic
Login or Register to read full story
Categories: Energy Fuels & Lubes LNG