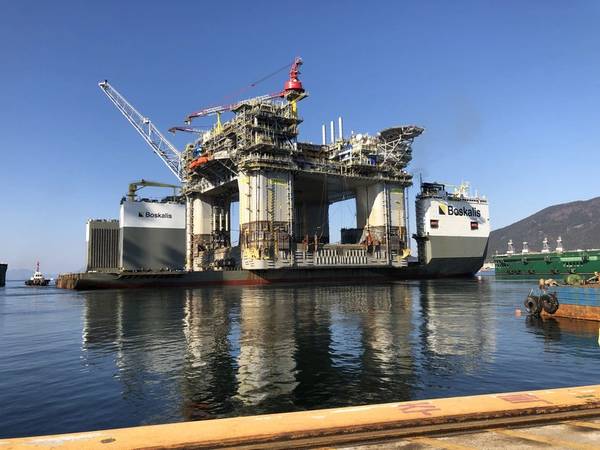 For Illustration - The Argos offshore oil platform is the centerpiece of the Mad Dog 2 project in the U.S. Gulf of Mexico. It arrived in the U.S. in April 2021. Credit: BP

Australia's Woodside Energy Group trimmed its production outlook for 2022 on Thursday and flagged a possible delay to a U.S. oil project inherited with BHP Group's petroleum assets, sending its shares down 4%.

Woodside, now a top 10 global independent oil and gas producer following its merger with BHP's petroleum arm, said the Mad Dog Phase 2 oil project in the Gulf of Mexico, due to start operations in 2022, may face delays after problems were detected in some equipment. [The Mad Dog 2 is operated by BP]

At the same time, [Woodside] said it expects its full-year output, excluding BHP assets, to be between 88 million and 94 million (mmboe), down 4 mmboe from its previous forecast, due to "new conversion factors," which analysts said was not well explained.

"The market is confused, and when these sort of complexities are poorly explained by the company, the market fears the worst. It's probably an overreaction today," said Dale Koenders, an analyst at Barrenjoey.

The production downgrade came as Woodside reported its second-quarter revenue more than doubled to $3.44 billion, including one month's contribution from BHP's assets, bolstered by booming oil and gas prices in the wake of Russia's invasion of Ukraine.

Woodside also said it has called off plans to sell a stake in its $4.6 billion oil project off Senegal after it failed to find a "quality partner" at a good enough price following nearly a year of talks.

"Look at the market conditions today, the Sangomar grade of crude is an excellent fit for many European refiners, so in our eyes the value of the asset is looking even better than when we took FID (final investment decision)," Chief Executive Officer Meg O'Neill told Reuters.

Analysts said Woodside had no need to sell down the Sangomar stake as it is cashed up with BHP's assets and strong oil and gas prices.

"It's quite logical for Woodside to hold on, rather than selling down and destroying value," said Suhas Nayak, an analyst with fund manager Allan Gray, a Woodside shareholder.

Woodside also pushed out a decision to 2023 on developing the 100,000 barrels per day Trion oil project off Mexico, inherited from BHP, amid rising costs for manufacturing components for mega projects worldwide. BHP was aiming for a final decision on Trion in 2022.

"I think we're seeing a lot of uncertainty in the marketplace all around the world amid uncertainty over contracting costs," O'Neill said.

Australia's biggest independent gas producer also hiked its annual capital expenditure forecast to a range of $4.3 billion to $4.8 billion from its prior view of $3.8 billion to $4.2 billion, based on spending at assets inherited from BHP.