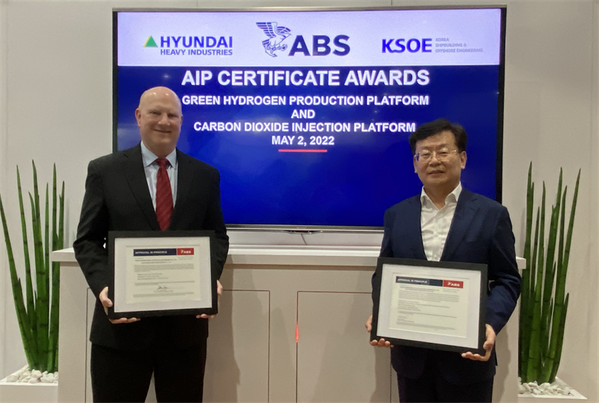 American Bureau of Shipping has granted its Approval in Principle (AIP) for the carbon dioxide injection platform developed by Hyundai Heavy Industries.

The platform has been designed to store carbon dioxide that has been captured on land, liquefied at high pressure, and transported to the sea through a carrier or pipeline in the seabed, as part of a pioneering joint development project (JDP) to advance carbon-reduction technologies, signed in 2021 between ABS and Hyundai Heavy Industries Group.

HHI Group has developed the platform with the goal of storing annually 400,000 tons of carbon dioxide underground in Korea’s East Sea gas field starting in 2025. The AIP was presented at the Offshore Technology Conference in Houston.

The JDP was one of two signed by KSOE and ABS, with a second focused on developing technical guidance for green hydrogen production from offshore platforms as a key first step to the design and construction of a facility by 2025.

The offshore green hydrogen production platform, which has also received ABS AIP, will be linked to renewable power sources on land as a near-shore concept, as well as a variety of offshore wind power. It will offer several options, including hydrogen liquefaction, ammonia, and methanol conversion to hydrogen power systems, to address a variety of hydrogen sources and transportation methods.

“Carbon capture is a game-changing technology with a key role to play in reducing greenhouse gas emissions. ABS is committed not only to supporting the development of the infrastructure such as this platform but the vessels that will prove critical to the value chain as well, with a laser focus on safety,” said Peter Fitzpatrick, ABS Senior Vice President, Global Offshore.