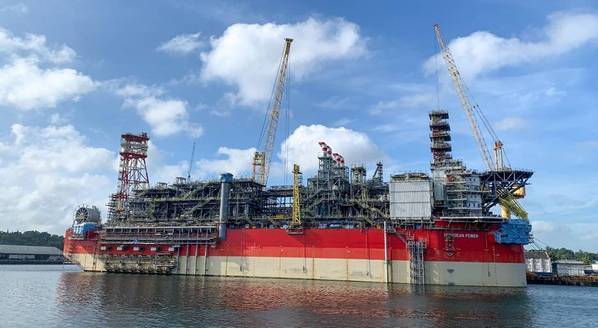 London-listed oil and gas company Energean said Tuesday its Karish gas field in the Mediterranean Sea, offshore Israel would come on stream by the third quarter of the year, with the Energean Power FPSO expected to sail away from Singapore during this quarter.

Back in November, Energean said that the gas production start-up from the Karish gas field „remains on track“ for mid-2022. The company had said that the FPSO journey from Singapore to Israel would take around 35 days, with hook-up and pre-first gas commissioning then expected to take approximately three months.

Worth noting, at the time of sanction in 2018, Energean had said the first gas would start flowing in 1Q 2021.

In an update on Monday, Mathios Rigas, Chief Executive of Energean, said: "The FPSO for our flagship project, Karish, is expected to be ready for sail-away by the end of this quarter. This will kick-start an eventful 2022 with the high-impact drilling program in Israel beginning in mid-March, first gas from Karish by Q3, and first gas from NEA/NI in Egypt by Q4.

"With our other development projects in Israel, Italy, and Greece also on track, we are well-positioned to reach our medium-term targets of over 200 kboed production, $2 billion annual revenue and $1.4 billion EBITDAX."

As for the FPSO, being built by Sembcorp Marine in Singapore, according to Energean, at December 31, 2021, the FPSO was 98.4% complete, and the overall project was 92.5% complete.

In November 2021, Dalia, one of the Karish gas buyers, sent notices to Energean purporting to terminate its gas sales agreement  - which represents 0.8bcm/yr of contracted gas sales - while also attempting to reserve its rights by claiming that should the notices be determined to be invalid or wrongly issued, the gas sales agreement would not have been terminated.

"Energean believes that the notices served by Dalia are invalid and constitute a material breach of contract, giving it the right to terminate the contract. Energean has exercised this right. If Dalia does not withdraw its notices the gas sales agreement will be terminated and Energean will seek to recover any damages suffered by it as a result," Energean said.

Energean also said it had identified a number of incremental buyers for its gas reserves and prospective resources.

In Israel, Energean said, the third gas fired power plant auctioned as part of the IEC privatization process (Hagit) has been awarded. The winning consortium is now seeking gas supply, the company added.

In December 2021, Energean signed an MOU with EGAS for the sale and purchase of up to 2 Bcm/yr of natural gas on average for a period of 10 years, starting with initial volumes of up to 1 Bcm/yr. This represents a commercialization option for gas resources discovered in the 2022/23 drilling campaign.

"Energean is confident of selling all volumes profitably and commercial discussions are underway with a number of domestic and international buyers," Energean added.