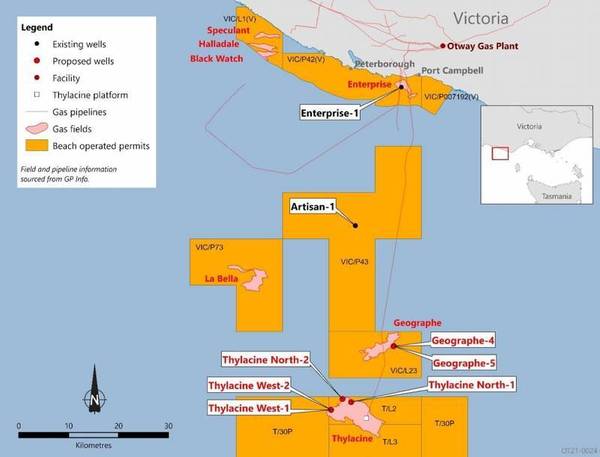 Australian oil and gas company Beach Energy has informed that gas production has started from the first two wells of its offshore Otway Basin campaign - Geographe 4 and 5.

The wells have been connected to the Otway Gas Plant and are now delivering gas into the East Coast market following the completion of the commissioning phase.

"The new wells effectively double the Otway Gas Plant production capacity which now has the well capacity to deliver ~180 TJ/d. Actual production rates will depend on customer nominations which vary on a seasonal and daily basis," Beach Energy said.

Connecting the remainder of the wells from the offshore campaign and connecting the nearshore Enterprise discovery is required to attain plant nameplate production capacity of 205 TJ/d.

Beach Energy Acting CEO, Morné Engelbrecht said the connection of the Geographe wells is an important step towards delivering on Beach’s growth targets at a time when the East Coast Gas market is potentially facing shortfalls as early as 2023.

"Achieving first gas from these Geographe wells is an important milestone for Beach as it represents the first gas from our first-ever offshore drilling campaign,” Engelbrecht said. “This represents one of the first key building blocks towards our production growth target of 28MMboe in FY24.

“We know that the East Coast market needs this supply of natural gas and this is why Beach is continuing its development campaign in the Otway Basin and we are focussed on delivering that program.”

Drilling and testing of Thylacine North 1 well, the third well in the 6-well development campaign, was also recently completed with the rig preparing to move to the Thylacine West 1 well location which will be followed by two more Thylacine development wells.