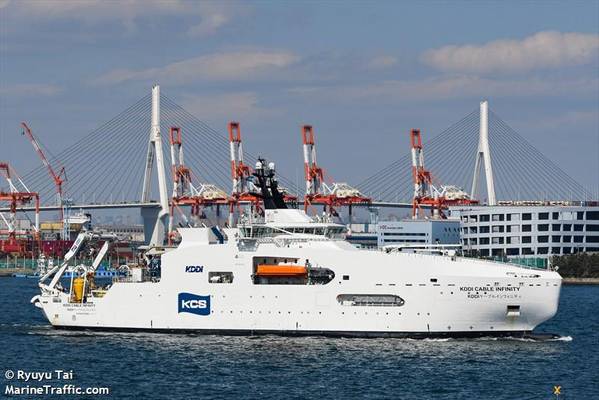 Japanese subsea cable laying firm Kokusai Cable Ship (KCS) and the shipping giant Mitsui O.S.K. Lines (MOL) have signed an agreement to collaborate on the operation of cable-laying ships to meet the increasing demand for the installation of power cables, especially in the offshore wind sector.

KCS, established in 1966, was the first company to launch a subsea cable laying ship - the KDD Maru - in 1967. The company has, over the years, been involved in the construction of some 70,000km of submarine cables, mainly in the Asia-Pacific region, and today oversees the maintenance of over 87,000km of cable.

MOL and its group company MOL Marine & Engineering Co., Ltd. (MOLMEC) have managed and operated a total of four KCS-owned cable-laying ships including the KDD Maru for over 50 years.

The MOL Group said in a statement on Friday it was the only Japanese ocean shipping company involved in the management and operation of cable-laying ships.

"Cable laying ships adopt “Dynamic Positioning Systems“ to lay submarine cables with safety and precision, and MOL and MOLMEC have accumulated technology and expertise to automatically maintain the ship position under various environmental and weather conditions," MOL said, adding that their collective know-how and skilled personnel are expected to be used in a wide range of various offshore businesses, "including the rapidly growing wind power generation field."

As part of the cooperation, KCS is responsible for cable handling and laying operations, while MOL and MOLMEC are in charge of ship management and operation including supplying seafarers who have the skills to operate the “Dynamic Positioning Systems“ important for cable-laying ships.

The two companies plan to jointly research commercial opportunities in new submarine cable-laying demand, mainly for offshore wind farm facilities, which are gaining wider application in Japan and throughout Asia.