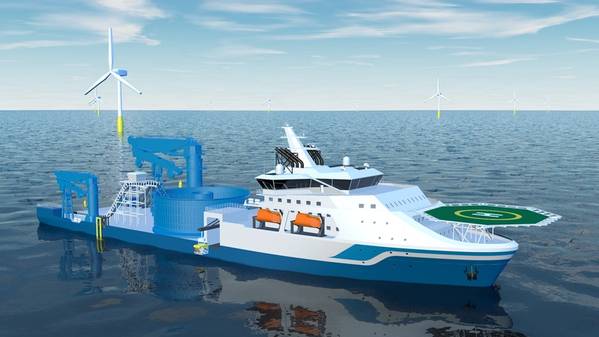 The company said that the vessel is expected to be ready by the end of 2023 and will be fully operational in the offshore cable laying business in 2024, "in response to the government’s promotion of the localization development strategy in the offshore wind farm industry."

High Tien Offshore is led by Chairman Tseng Kuo-Cheng who was previously the President in CSBC and the Chairman of CDWE.

CDWE is a joint venture between CSBC, the largest shipbuilder in Taiwan and Belgian offshore installation firm DEME Offshore. The JV is building the Green Jade, the first floating, DP3 heavy lift, and installation vessel to be built in Taiwan.

Tseng Kuo-Cheng, Chairman High Tien Offshore, said: “We are very glad to see that our government shows huge importance in the establishment of the local offshore engineering, which has a huge leading role in Taiwan’s development of renewable energy, expansion of the marine economy and strengthening of national ocean influences.

"The aim of the investment of High Tien Offshore in an advanced large Cable Laying Vessel is to build an independent role for the main offshore installation works. This is the core of offshore engineering. We will keep our vessel, talents and technologies in Taiwan: setting our roots here, developing and contributing to Taiwan, and then for a further expansion in the APAC and international market.”

High Tien Offshore expects that the vessel will meet the operational requirements in the offshore wind farms in Taiwan and APAC region.

"She will have a big loading capacity, a large turntable capacity, strong dynamic positioning capability, high resistance to wind and waves and be equipped with advanced WROV and trenching equipment," the company said.

The vessel will be able to install inter-array cables and export cables in the offshore wind farms, but will also be capable of installing submarine communication cables laying and conduct emergency repairs of the submarine cables.