European oil firms including Total, BP, Equinor and Shell have all outlined plans to speed up investments in renewables, including offshore wind, as they look to reduce their reliance on oil and gas to satisfy investors and governments which are demanding reductions in emissions.

"Short term we have seen it already, and it's a real and genuine concern," Orsted Chief Executive Mads Nipper told Reuters in an interview for the upcoming Reuters Events: Global Energy Transition conference.

He said seabed options around the coast of England, Wales and Northern Ireland had been awarded at "very high prices" at a leasing round held by the Crown Estate earlier this year.

"Our concern is that if that inflation continues it will eventually come to the disadvantage of the speed with which we accelerate the technology or the competitiveness of the technology," he said.

He urged politicians to make more seabed available for offshore wind farms and streamline consenting and permitting processes. "If substantial amounts are to be made available then there is going to be enough for everybody".

"For offshore wind, having sufficient availability of seabed that is even remotely affordable that is just one of the things that is really, really vital ... It needs to happen quite urgently," Nipper, who joined Orsted in January, said.

The offshore wind industry is facing a pivotal moment as governments around the world, excluding China, target installed capacity of 170 GW by 2030, up from just 24 GW today.

Nipper said he believes there is political commitment to reach that goal despite the current mismatch between ambitious climate targets and actual capacity in companies' project pipelines.

"We are starting to see that move faster already," he said, pointing to upcoming leasing rounds in Scotland and New York state. 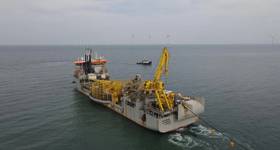