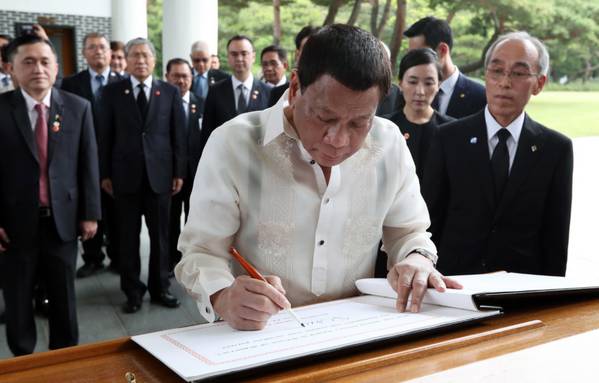 Philippines President Rodrigo Duterte has lifted the moratorium on petroleum exploration in the South China Sea, paving the way for three projects to resume, including a possible joint venture with China.

Energy Secretary Alfonso Cusi said on Thursday that service contractors were notified to resume energy-related activity in the area, which had been suspended from 2014 due to territorial disputes.

Last year Duterte said Beijing had offered Manila a controlling stake in a joint energy venture in the South China Sea, if it sets aside an international arbitral award that went against China.

The Philippines had imposed the moratorium while awaiting a ruling in a case by the Permanent Court of Arbitration in the Hague, which in 2016 invalidated China's claim to sovereignty over most of the South China Sea.

Cusi said the decision to lift the moratorium was arrived at "in good faith and with full regard of the ongoing negotiations between the Philippines and China, and Forum Ltd and the China National Offshore Corp" (CNOOC).

Forum, a unit of the Philippines' PXP Energy Corp, operates Service Contract 72 covering gas exploration in the Reed Bank, which is within the disputed territory. PXP has had talks with CNOOC about joint exploration and development there.

Two other exploration projects have been given the go-signal, such as SC 59 operated by Philippine National Oil Company and SC 75, also by PXP.

"The lifting of the suspension places the service contractors under legal obligation to put capital into the contract areas and hire Filipino engineers and technical workers," Cusi said in a statement.

The Chinese embassy in Manila did not respond to Reuters' request for comment.