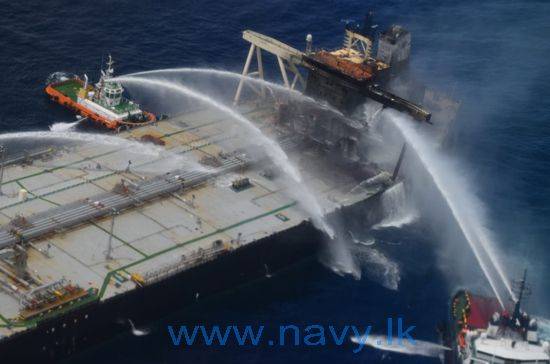 The Sri Lankan navy said on Wednesday it had extinguished another fire on a stricken supertanker loaded with 2 million barrels of oil and is towing it to deeper water.

The navy's disaster management team put out the fire that reignited on Monday on the MT New Diamond, and there were currently no fires burning on the ship which is 41 nautical miles (76 km) off Sri Lanka's east coast.

Officials were working to assess any damage to the environment from the incident, which began on Sept. 3 when a fire broke out in the engine room.

On Tuesday, the navy spotted an oil slick a kilometer from the supertanker, chartered by Indian Oil Corp to import about 2 million barrels of oil from Kuwait.

The spill appeared to come from the engine room.

"We are certain the leak is not from the crude oil storage tanks. We are readying a team of divers to detect the exact spot of the leak," navy spokesman Indika de Silva said.

Three members of a salvage team had boarded the tanker, he added.