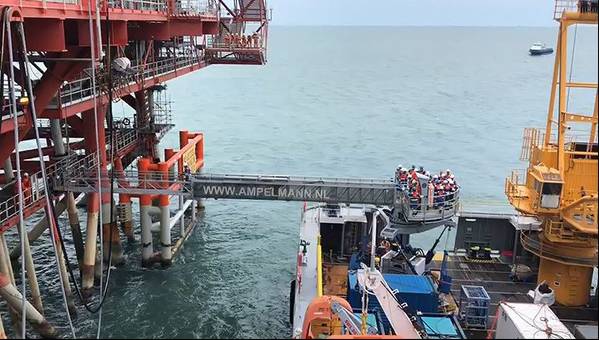 Dutch offshore gangway solutions provider Ampelmann has won a contract that will see one of its crew-transfer gangways deployed offshore India.

Ampelmann said Tuesday that it had signed a contract with offshore engineering and construction firm McDermott to deliver its A-type Enhanced Performance walk-to-work gangway, which is the first time an Ampelmann system will be deployed offshore the east coast of India

The project, with a duration of approximately 50 days, is taking place during the monsoon season in India.

"Strong winds, high waves, and most unpredictable weather conditions can slow down or even put work on hold during this season. The Ampelmann AEP system was, thus, the suitable choice for these conditions," Ampelmann said.

With Ampelmann's motion compensation technology, the gangway enables safe personnel transfers in a sea state up to 4m Hs.

“While it will be the first time for Ampelmann to operate on the East Coast of India, it definitely isn’t our first time operating during monsoon,” said Vincent Chua, Ampelmann’s Commercial Manager in Singapore.

"Our systems have continuously proven themselves during the monsoon season, maximizing operational availability and safety for the offshore crew. With an increased uptime, we can reduce the amount of waiting on weather (WOW) days and decrease the overall duration of projects.”