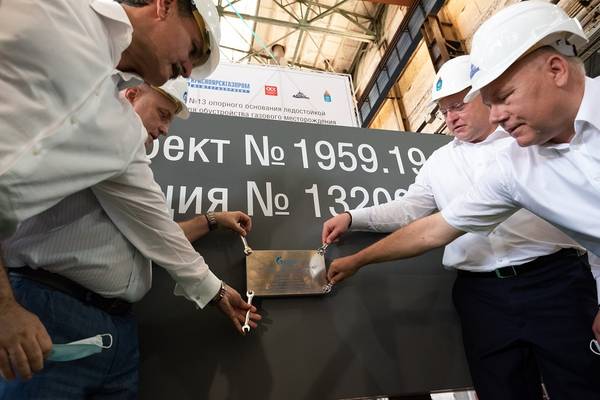 Construction of Gazprom's ice-resistant offshore production platform for the development of the Kamennomysskoye-Sea field began Thursday at the shipyard of Southern Shipbuilding and Repair Center (part of United Shipbuilding Corporation) in the Astrakhan Region.

The Kamennomysskoye-Sea gas field is located in the Ob Bay of the Kara Sea where temperatures can drop to minus 60 degrees Celsius.

"The development of this field will become the first shelf project in the world to be implemented in such extreme ice and climate conditions," Gazprom said.

Gazprom is now building a special ice-resistant platform for the development of the field. The platform will be more than 135 meters long, 69 meters wide, 41 meters tall from the base to the helicopter pad, and its weight will exceed 40,000 tons in total.

The structures placed on the platform will include, inter alia, main and auxiliary drilling modules, operational and energy complexes, and living quarters for 120 people.

The ice-resistant platform will be used to build 33 main directional production wells (later on, another 22 wells for maintaining production rates will be placed on satellite ice-resistant conductor platforms that do not require the permanent presence of personnel). The extracted gas will be fed into pipelines and arrive onshore into a comprehensive gas treatment unit and a booster compressor station. After that, the gas will go into Russia's Unified Gas Supply System.

"In the summer navigation period of 2024, it is planned to tow the [ice-resistant platform ] to the field, after which flare booms and a helicopter pad will be set up at the facility. Construction operations will involve about 7,000 Russian workers and specialists."