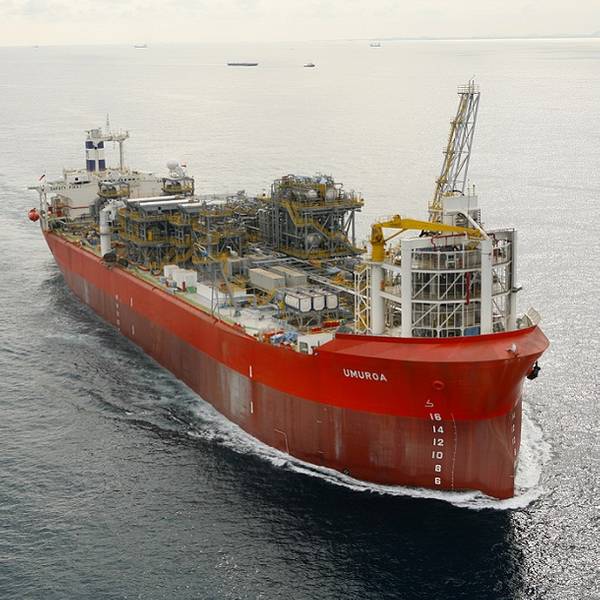 FPSO-leasing company BW Offshore has been unable to remove the Umuroa FPSO from the Tui field in New Zealand following the contract termination, client liquidation, and the country's court and environment regulator intervention.

The company was in October 2019 informed by the client Tamarind Taranaki (TTL), a subsidiary of Tamarind Resource, the FPSO contract would not be extended after December 31, 2019.

BW Offshore then said it would undertake work to disconnect and demobilize the FPSO, expecting to disconnect from the field and sail away to Singapore by the end of March.

However, a problem arose as before removing the vessel, BW Offshore needs to disconnect it from Tamarind's equipment on the seafloor, and the environment protection regulators want all of this subsea equipment removed as well, something which is, per BW, the responsibility of Tamarind.

In an update on Friday, BW Offshore said the FPSO was still at the field location as a court ruling prevented the company from removing the vessel under the previously agreed rule where it is possible to lay down of risers on the seabed. This means that these need to be removed now and BW Offshore says this is the responsibility of the now insolvent Tamarind, meaning the FPSO is unable to move at the moment.

"The 2017 Ruling allows lay down of risers on the seabed for the FPSO to safely disconnect and sail away. The risers are the responsibility and property of TTL. BW Offshore have no responsibility related to this equipment. TTL is insolvent and in liquidation and is currently not able to execute disconnection activities as per the Charter Contract."

According to BW Offshore, the best and safest approach for disconnection is to follow the procedure in the 2017 Ruling and cap and lay down the risers on the seabed pending removal of the risers as part of full-field decommissioning, which, BW Offshore says is not its responsibility [but Tamarind's].

In March 2020, the EPA imposed abatement notices to prevent BW Offshore from disconnecting the risers under the 2017 Ruling on the basis that circumstances have changed since the 2017 Ruling was granted.

Tidy up before you leave

High Court's Justice Cooke noted, as shared by EPA, that the EEZ Act is not concerned with legal ownership of the equipment. “It (the Act) is only concerned with the effect of those activities on the environment and existing interests,” he said.

Justice Cooke also said: "Parties engaged in significant oil mining activities need to ensure that those activities are appropriately brought to an end from an environmental point of view (as well as the point of view of the other existing interests contemplated by the Act) before departing the scene. That is saying no more than people must tidy up any activity before they leave."

BW Offshore further said. "The Company is taking advice on whether to appeal the recent High Court decision which contains certain inaccurate statements and gives the impression that BW Offshore was in a partnership or joint venture with TTL. This is not the case. BW Offshore was a service contractor to TTL and has no ownership interest in the field," BW Offshore said.

"Due to uncertainty whether BW Offshore may disconnect using the 2017 Ruling, combined with the COVID-19 situation and the onset of the southern hemisphere winter, the Company has decided to plan a for lay-up of the unit on the field until further clarification can be received from authorities," BW Offshore added.

The company said it would continue to work with the New Zealand authorities to develop a new plan for demobilization. "A significant portion of the estimated USD 20 million demobilization cost has been incurred to date as preparatory work has been done and support vessels for demobilization had been mobilized prior to abatement notices being imposed by the EPA," BW Offshore said. The Umuroa FPSO has been operating on the field since 2007.