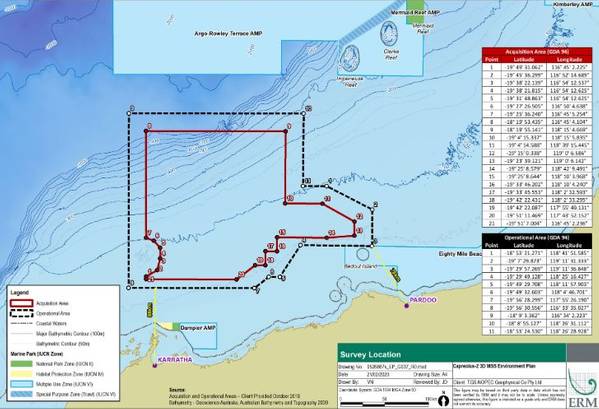 Norwegian offshore seismic data acquisition and processing company TGS is planning to carry out a seismic survey in the Carnarvon Basin, off Australia, and the Australian offshore safety regulator NOPSEMA has opened the TGS for public comment.

TGS is proposing to carry out the Capreolus-2 three-dimensional (3D) marine seismic survey to collect high-quality geophysical data about rock formations and structures beneath the seabed and assess the potential for new oil and gas discoveries.

The Capreolus-2 3D MSS is a typical 3D survey using methods and procedures similar to others conducted in Australian waters. No unique or unusual equipment or operations are proposed, NOPSEMA said.

The acquisition area comprises the area within which 3D seismic acquisition will be undertaken and covers approximately 27,649 km2. The area is surrounded by a larger Operational Area (42,868 km2), for the purpose of line turns, run-ins, run-outs, seismic testing and support activities.

The operational area at its closest is approximately 88 km north of Karratha and 78 km north-west of Pardoo. The seismic survey will be undertaken in water depths between approximately 50 m to 1,133 m.

The survey will involve a single seismic survey vessel towing a seismic source array with a total volume of 3,480 cubic inches (in3). The seismic source will use compressed air to emit regular pulses of sound that reflect off the seabed and underlying rock formations. The reflected sound wave will be received by up to 12 hydrophone streamers.

At the end of each line, the vessel will turn in a wide arc to position for another parallel line in the opposite direction. This pattern is repeated until the required coverage is completed.

It is estimated to take between approximately 95 - 195 days to acquire 10,000 km2 (including contingency time for potential vessel or equipment downtime and adverse weather conditions).

The precise timing of the survey is subject to NOPSEMA’s acceptance of the EP, weather conditions, vessel availability and other operational considerations, and will take into account the seasonality of environmental sensitivities, where practicable. 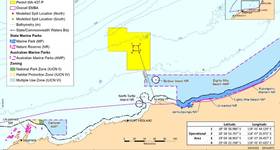 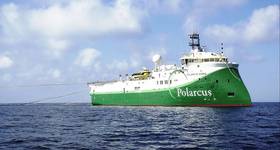