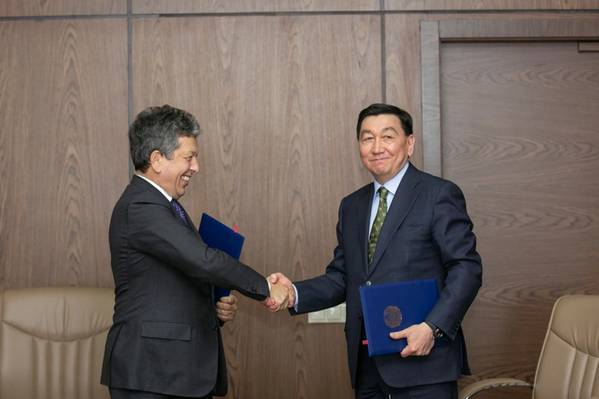 Chairman of the Management Board, NC KazMunayGas (KMG), Alik Aidarbayev and Director General of Tatneft Nail Maganov signed the Roadmap on Introduction of the Tatneft Best Practices in the Petroleum Industry of the Republic of Kazakhstan. The implementation period is 2020.

During the meeting, held in Nur-Sultan, the heads of KMG and Tatneft discussed how the partnership can be organized, including the establishment of a joint venture in Kazakhstan.

The parties agreed that Tatarstan experts would analyze the efficiency of the current production system and measurement of production processes in KMG. They will also consult on introduction of WO supervising, diagnostics and flaw detection and environmental audit.

Tatneft, which has considerable experience in developing the fields with hard-to-recover reserves, will start its active interaction with the national operator on organization of the high viscosity oil development system at the Eastern Moldabek site using SAGD technology.

As part of the Roadmap, after receiving geological, technological and economic data on mature fields from KMG, the issue of whether Tatneft will be involvement in their development will be considered.

“I am sure that the signing of the Roadmap will bring our cooperation to a brand new level. The document will lay the foundation for further strengthening of partnership between oil and gas companies of the two countries,” said the head of KMG Alik Aidarbayev.

It should be reminded that, on July 10, 2019, KMG and Tatneft signed a Memorandum of Understanding, which outlined the proposed areas of cooperation. The Roadmap is a logical continuation of the intentions of two companies which specifies the main areas of cooperation.