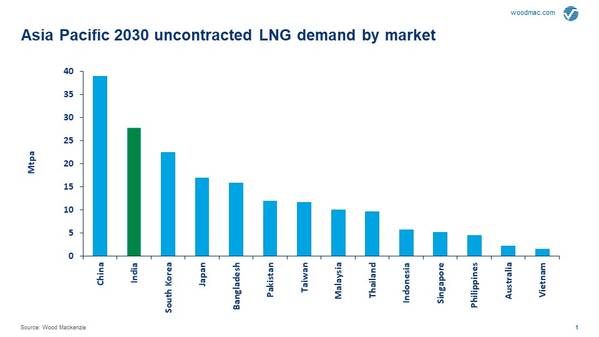 ‘To lose patience is to lose the battle’ -Mahatma Gandhi

India is something of a conundrum for global LNG players. I recently returned from a week in Delhi, just as the capital was making headlines for one of the worst episodes of air pollution, while the country’s energy mix remains dominated by cheap domestic coal. At the same time, gas price sensitivity continues to stymie investment and contracting negotiations. Progress has been made with LNG import terminals but delays to pipeline infrastructure and convoluted gas allocation policies frustrate demand growth. And of course, India’s infamous bureaucracy and pace of decision-making could test the patience of even a Hindu saint.

In this environment, most of the world’s major LNG suppliers have only modest exposure to India. In comparison to China, where Shell, Total, ExxonMobil, BP and PETRONAS combined have over 30 Mtpa of contracted supply, their India portfolios amount to only something like 5 Mtpa of SPAs. Strategies for cracking the Indian gas market have proven elusive.

This is now set for change. BP, Total and ExxonMobil have all announced recent deals and investments with Indian partners, suggesting that Big Oil is rethinking what is achievable in the country. Moving from a passive LNG contracting model or upstream entry through a traditional PSC, I see the Majors now pushing to ‘make it happen’ in India. This India reboot reveals new thinking, investing through the value chain, targeting specific sectors and building strong local partnerships. This is driving deal-making that is both innovative and that works for both Indian partners and consumers.

India overtakes South Korea as world’s third-largest LNG market by 2030
Yes, India is challenging. But the outlook for gas and LNG demand growth remains robust. New regasification and downstream network connections are (slowly) unlocking latent gas demand and although we’re unlikely to see government’s target of a 15% share of the primary energy mix for gas by 2030 being met, opportunities are aplenty.

Now is the time for reboot
It is this scale of growth that is now leading to a reboot of what is achievable in India - 28 Mt of uncontracted LNG demand by 2030 tends to do this (I’m excluding the September 2019 Petronet LNG MOU with Tellurian here). In addition to pursuing their own pre-FID LNG projects, Shell, Total, PETRONAS, ExxonMobil and BP have also built up long LNG offtake positions to expand their portfolios over the past two years. Combine this with a moderating Chinese LNG demand growth through 2019, and the importance of India becomes easy to understand.

Rising competition is also a factor. US project developers have made inroads into India and with its growing portfolio of flexible, low-cost supply, Russia’s NOVATEK is aggressively targeting Indian buyers, signing MOUs in September 2019 with H-Energy and Petronet LNG. And of course, India is inevitably a major target for Qatar’s uber competitive and proximate mega train expansions.

‘Making it happen’ in India
It’s been a busy few months for the Majors in India. Back in June, BP announced FID on the MJ project in the offshore KG D6 block with local partner Reliance Industries. The project is the third phase of the KG D6 integrated development plan and sees BP cement its place as the largest foreign player in India’s upstream sector. With the partners committing to around US$5 billion of investment across the three phases of KG D6, the plan will ultimately see 1 bcfd of gas supplied into the domestic market as the phases come onstream 2020-2022. Undoubtedly the strength of Reliance as a local partner is encouraging BP that things can get done in India.

Also looking to get things done in India is Total. The company announced in October the acquisition of 37.4% stake in domestic player Adani Gas. The deal will act as a means for Total to supply portfolio LNG into India (particularly additional Mozambique trains in future) and to access the Adani Gas pipeline network and domestic end-users through its expanding domestic distribution and retail networks. As with BP/Reliance, a strong local partner with established relationship and an ability to manoeuvre bureaucracy will be critical to future success.

Two separate preliminary partnerships were also announced in October by ExxonMobil with both ONGC and Indian Oil. The ONGC deal aims at closer collaboration on upstream investment, for example joint bidding on blocks. The second deal with Indian OiI will explore ways to lower the cost of gas delivered to the Indian market. These are further examples of Majors looking to build strong local partnerships, and with FID expected on Rovuma LNG in Mozambique in Q1 2020, India will be a key target market for ExxonMobil.

Challenges and risks exist but opportunities abound
India doesn’t come without risk and the list is long. How quickly can reform take place? Can India really afford LNG? Will partnerships stick? Could gas get squeezed between cheap coal and low-cost solar in the power sector? Might Qatari LNG stitch up the Indian market? How durable are long-term contracts? I could go on. But I always return to scale and opportunity. A reboot of what is possible in India is now firmly underway.