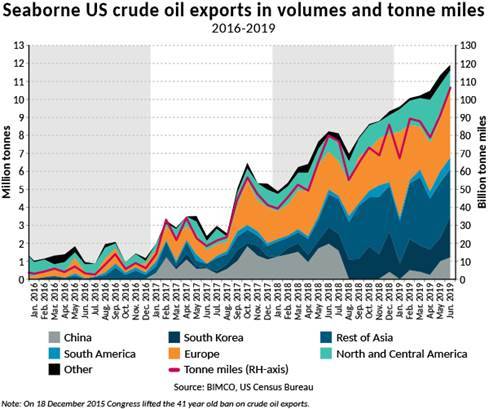 1.2m tonnes were shipped to China between June 1, and  June 30, , up from 1m tonnes in May and worlds apart from no exports at all in the months of August through October in 2018 and again in January 2019.

“From being a very consistent and significant buyer of US crude oil until the trade war changed it all, China was back above a 1 million tonnes in June 2019.

As China stopped buying in August 2018, South Korea became the no 1 destination for US seaborne crude oil, taking 1.5m tonnes on average per month in 2019, and setting a record of 2.3m tonnes in June 2019.

Taking 2.3m tonnes of crude oil from the U.S. in June, meant that South Korea was the main destination, buying 19% of total seaborne US crude oil exports in that month.

The same goes for India, which imported an average of 1.3m tonnes in March through June from the US, while cutting its Iranian imports sharply from 1.4m tonnes in March and April to zero in June. India used to be Iran’s second largest buyer of crude oil after China.

“Crude oil tankers enjoy higher tonne mile demand, when India turns to the US instead of Iran to source its need for crude oil.

Geopolitical instability is often the main reason behind changes in the trade patterns of the oil tanker market.