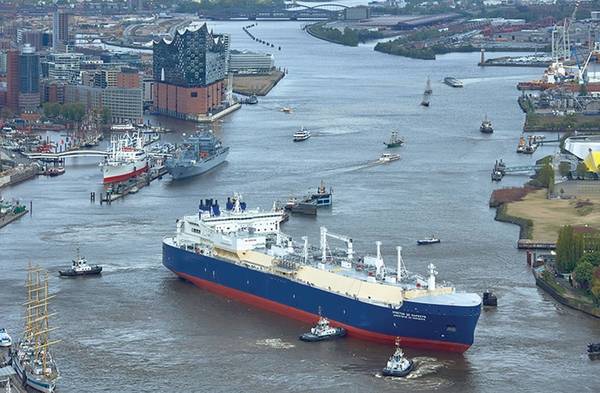 The Georgiy Ushakov and Yakov Gakkel LNG tankers are both in water at the Daewoo Shipbuilding and Marine Engineering (DSME) Okpo shipyard in South Korea and indicating they are performing sea trials, the data showed. The Vladimir Voronin, meanwhile, finished its sea trials and has left the Sea of Japan, setting Yamal LNG as its destination. It is appears to be taking the Northern Sea Route through the

Bering Straits, turning west at the north-eastern tip of Russia.

The tankers are part of a 15-strong fleet ordered by LNG companies for Yamal, which began operations in December 2017 and has contributed to a boom in LNG supplies in the past 18 months. Yamal is dependent on the ice-breaker tankers to ship LNG out of the Arctic waters.

The tankers have largely conducted ship-to-ship transfers in Europe to conventional carriers for onwards delivery, but during summer months they can traverse the Northern Sea Route to Asia. Two such trips have been made this month. All but one of the tankers are named after Russian arctic

explorers and scientists. The first Arc7 tanker, the Christophe De Margerie, is named after the former boss of Yamal's partner, Total, who died in an air crash in Russia in 2014.