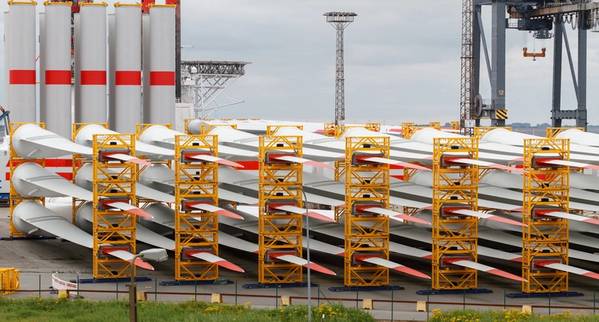 Now that the United States finally can envision steady winds blowing from the Atlantic Seaboard due to a pipeline of offshore wind farms on the horizon, the maritime industry can finally step up and earn some of the benefits. This includes shipbuilding, port construction, and worker training. This article reviews the key developments and forecasts the growth in maritime jobs.

The federal and state governments share responsibility for developing offshore wind farms and bringing the wind into the power grid and, ultimately, to consumers.

This shared responsibility arises from the fact that the federal government, through the secretary of the interior, leases areas of the outer Continental Shelf (OCS) to developers, and the states are responsible for setting terms for the wind to be brought into the state power grids and ultimately sold to consumers. Winds blow the strongest farther from shore —hence the rush to lease Wind Energy Areas (WEAs) on the OCS. These locations also have the advantage of the turbines not being seen by local beachgoers.

To date, the Bureau of Ocean Energy Management (BOEM), part of the Interior Department, has awarded 16 leases to a variety of U.S. and European developers. And more leases are due to be auctioned off Long Island, NY, later this year. European developers such as Ørsted, Equinor, Copenhagen Infrastructure Partners, and Avangrid Renewables have brought their extensive European experience with them, enabling them to bid on and manage U.S. wind farms at competitive rates. These leases range in value from $1.5M to $135M at the latest auction. Prices for the wind have declined to a levelized price of 6.5 cents per kilowatt hour in the case of the Vineyard Wind project off Massachusetts.

Once BOEM awards the lease to the highest qualified bidder, the agency starts the National Environmental Policy Act (NEPA) and other environmental review processes and lessees have to meet BOEM deadlines for site assessment plans and construction and operation plans and financial commitments. (30 CFR Part 585.)

The states have a major role to play because they have to allow the wind to come ashore through a series of pipelines and cables as well as approve the terms of the sale to public and private off-takers, including utilities and state regulatory agencies. States can also incentivize the wind through Ocean Renewable Energy Certificates (ORECs) and other subsidies.

The states along the Eastern Seaboard are also competing for the anticipated high-skilled jobs and, in some cases, funding for new port projects that accompany the offshore wind farms.  These states acting through their governors and state legislatures are setting very high goals for renewable energy generally and offshore wind in particular.

For example, the governor of New York’s goal is for 9,000 megawatts (MW) of OSW by 2035; the governor of Rhode Island has set a goal of 1,000 MW of clean energy projects by the end of 2020; and the Massachusetts legislature has created a goal of 3,200 MW of OSW by 2035. Finally, in Virginia, the state legislature declared 3,000 MW of OSW to be in the public interest, allowing (some say requiring) the State Corporation Commission to approve the two-turbine Coastal Virginia Offshore Wind (CVOW) project owned by Dominion Virginia Energy and managed by Ørsted.  This project is expected to come online in 2020.

Next Steps: Compliance with Environmental Laws

We are at a critical stage for the development of these offshore wind farms. The developers have established operational dates ranging from the end of 2019 to 2023 for bringing the wind ashore. Some developers are racing to meet the 2019 deadline for compliance with the Production Tax Credit (PTC) that, unless extended by Congress, expires at the end of the year.   Ways and Means Chairman Richard Neal (D-MA) recently announced he would support such an extension.

The developers also have to face permit and environmental law restrictions, including NEPA and the Marine Mammal Protection Act. In most cases, BOEM is the lead agency for compliance with these environmental laws, but other agencies are consulting in the NEPA process.

For example, BOEM and the National Marine Fisheries Service (NMFS) have almost completed an extensive review of the 100-turbine Vineyard Wind project off the coast of Massachusetts. A Draft Environmental Impact Statement is completed; the Final Environmental Impact Statement will be issued shortly; and NMFS has proposed to issue a one-year extension of an Incidental Harassment Authorization (IHA) to Vineyard Wind, LLC, allowing Vineyard to harass certain marine mammals pursuant to the Marine Mammal Protection Act due to the presence of migrating whales, seals, and dolphins near the project site that could affect the hearing of these species during the pile-driving phase for installation of the generators and electrical service platforms. In an April 30, 2019, Federal Register notice (the comment period closed on May 30, 2019), NMFS proposed extending a year-long IHA to Vineyard for this project, assuming it complies with an extensive series of mitigation measures, including seasonal restrictions on pile driving, expansive clearance zones around the pile-driving equipment (especially for North Atlantic Rights Whales), and sound attenuation devices. (84 Federal Register 18346-18381, April 30, 2019.)

European developers, who learned the hard lessons of Cape Wind and its NIMBY problems, have worked closely with states and communities to share the benefits of offshore wind.

For example, Ørsted and Eversource committed $4.5M to Rhode Island, $3.5M of which will be used for higher education for OSW programs at the University of Rhode Island, and $1.5M will support the development of Rhode Island’s offshore wind supply chain and workforce. (See https://nawindpower.com/Ørsted-us-offshore-wind-eversource-pledge-4-5m-for-rhode-island.)

Ørsted and Eversource also worked with the Connecticut Port Authority to commit $225M to upgrade a state pier in New London, Connecticut, making it usable for assembly and installation of wind turbines. (See www.courant.com/business/hc-biz-wind-power-state-pier.)

State legislatures also provide funds for workforce and supply chain development grants.  This is especially true in the cases of Maryland and Massachusetts. (See for example in Maryland: https://energy.maryland.gov/Pages/Info/renewable/offshorewindworkforce.aspx.)

Other states like New York and Virginia have developed extensive directories of businesses who can meet the needs of wind farm developers. Maritime suppliers should work with state agencies to make sure they are included. (See www.nyserda.ny.gov/All-Programs/Programs/Offshore-Wind/Economic-Opportunities/Supply-Chain-Database and www.vaoffshorewind.org/supply-chain.)

State laws (e.g., in MD and NY) often require a certain percentage of local content before approving the wind project. But at the end of the day, they are primarily looking for the lowest price so that consumers are not harmed by the price of the wind in their next energy bill.  And, prices are coming down to levels competitive with natural gas. (See statistic above for the Vineyard Wind project off MA.)

For the most part, we have found the Jones Act is not an impediment to the construction and operation of OSW farms. In fact, U.S. shipyards are taking advantage of the law to build crew transfer and supply vessels.

Just recently, Ørsted, in conjunction with WindServe Marine, LLC, announced that it has selected two U.S. companies to construct new Jones Act qualified crew transfer vessels (CTVs).  The first CTV will be built in Hubert, NC, at U.S. Workboats, and the second by Senesco Marine in North Kingstown, Rhode Island. The first CTV will be deployed to the Virginia CVOW project; the next will be used in the Ørsted/Eversource Revolution Wind project off southern New England. (See www.offshorewindus.org/2019/05/08/Ørsted-awards-windserve-marine-first-u-s-offs.)

Forward-thinking yards like Blount Boats in Warren, Rhode Island, have already stepped up to the plate and built a UK-designed offshore support vessel, which was used in the Deepwater Wind project in Rhode Island, the first commercial offshore wind farm in the United States. (Deepwater Wind has subsequently been acquired by Ørsted, the Danish wind company involved in numerous U.S. projects, as noted above.)

At the same time, the United States has not committed to building a heavy-lift vessel to lift the huge turbines aboard the platforms once they are in place, and foreign-flag vessels used in worldwide trades are used for this stage of development. Since they stay outside the territorial limits of the United States, they can continue to do this work.

What Remains to Be Resolved

OSW development is, unfortunately, not subject to one-stop shop permitting. And, various agencies have taken different positions on how the federal OCS Lands Act applies to a wind farm project as compared to an oil and gas project. This is leading to confusion and potentially stopping progress for OSW farms. This is also the case for what type of visa should be issued to specialists serving aboard OSW support vessels. (This will be addressed in the next issue of Maritime Reporter & Engineering News. )

The current end of the PTC is also discouraging to developers who have to finance their own projects—albeit with some state support. The Department of Energy loan guarantee program and port infrastructure grants are other finance options.

Offshore wind is coming to the United States and a maritime community near you, accompanied by good jobs and clean renewable energy. Join the bandwagon and support these exciting new farms just over the horizon. Take advantage of the dollars being contributed by developers to jobs and training and make sure your company is on the state supply list. Finally, encourage Congress to support an extension of the PTC or Investment Tax Credit and to resolve some of the knotty jurisdictional issues faced by too many agencies in the OSW permitting stew.

Joan L. Bondareff is of counsel in Blank Rome LLP's Washington, D.C., office who focuses her practice on marine transportation, environmental, regulatory, renewable energy, and legislative issues. She currently serves as Chair of the Virginia Offshore Wind Development Authority (VOWDA), an appointment by Virginia Governors Terry McAuliffe and Ralph Northam, where she promotes offshore wind and renewable energy for the Commonwealth of Virginia. 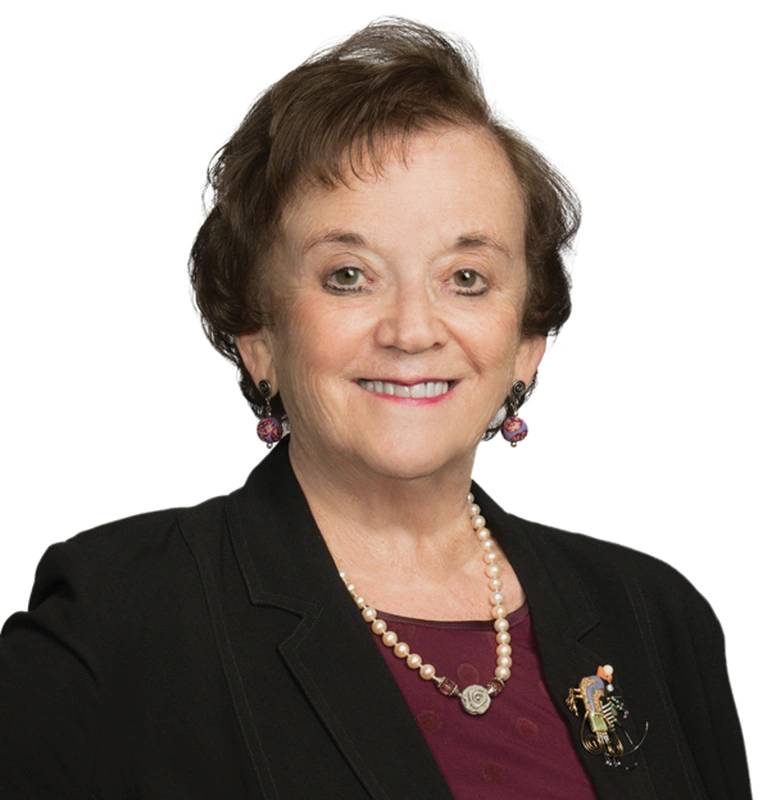 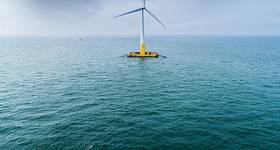