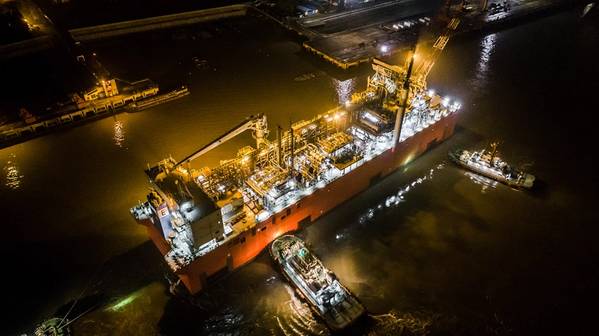 Belgium based EXMAR announced Thursday that its floating liquefied natural gas (FLNG) facility has left China for a 45-day voyage to the destination of its liquefaction operations at the Port of Bahia Blanca in Argentina.

The barge-based Tango FLNG (previously named Caribbean FLNG) is on the move just one month after a contract was signed for a firm, 10-year deployment.

Upon its arrival, the facility will be put in operation for EXMAR’s customer YPF S.A. and is expected to start up LNG production in the second quarter of 2019. Tango FLNG is designed for a liquefaction capacity of about 500,000 tons tons of LNG per year and will play a central role in YPF’s efforts to export LNG from the Vaca Muerta source at the Neuquén Basin in Argentina to the international markets. Up to eight LNG cargoes per year will be produced over a 10-year period.

EXMAR said the hire rate of the unit is partially based on a floating rate with an expected EBITDA of around $43 million per year based on the estimated production of the Tango FLNG, with upside potential depending on the market environment.