U.S. oil major Exxon Mobil Corp has withdrawn its WCC liquefied natural gas (LNG) export project in Canada from an environmental assessment, it said on Thursday, signalling that the project has been shelved.

The decision to pare its LNG project portfolio follows the decision by a Royal Dutch Shell-led group to build a giant LNG project in British Columbia to supply Asian customers, and Exxon's focus on LNG projects in Asia, the Middle East and the United States.

British Columbia rules require large projects to obtain an Environmental Assessment Certificate before they can be developed.

An examination of the project by the Canadian Environmental Assessment Agency has been going on since February 2015.

"After careful review, ExxonMobil and Imperial (Oil Resources Ltd) have withdrawn the WCC LNG project from the environmental assessment process," a spokeswoman for ExxonMobil said in an email.

Exxon's decision signaled it is concentrating on LNG projects with Qatar Petroleum and a proposed expansion of its chilled-gas operation in Papua New Guinea, said Jason Feer, head of business intelligence at Poten & Partners, LNG tanker brokers and consultants.

"They have got a pretty robust pipeline of liquefaction projects globally. It would be natural to review that and see which would be competitive," he said.

Exxon has been "taking advantage of opportunities as they become available to invest, restructure or divest assets to strengthen our long-term competitive position and provide the highest return to shareholders," said spokeswoman Julie King.

LNG demand is growing but environmental groups say exports will boost carbon emissions in Canada, both through gas extraction and the liquefaction process. 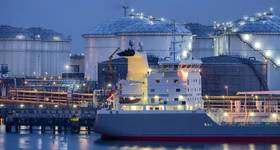