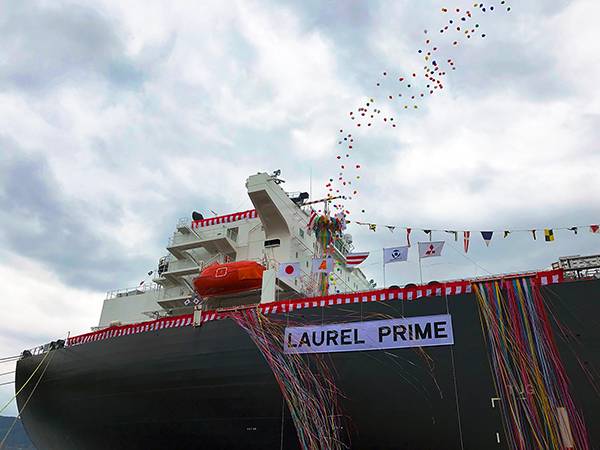 The christening ceremony was held at the Koyagi Plant of MHI's Nagasaki Shipyard & Machinery Works for the ship named “Laurel Prime” by Seiya Araki, president of Astomos Energy Corporation.

NYK has traditionally given LPG carriers two-word names that begin with the letters “L” and “P” respectively. This ship was named Laurel Prime with the wish that it will represent superior achievement and honor, the meaning of the word, recognizing that laurels have often been used to crown victors.

In addition to energy saving performance, the ship will have the capability to adapt flexibly to major LPG terminals worldwide, as well as specifications compatible with the newly expanded Panama Canal. Completion and delivery is scheduled for the end of December, 2018. The vessel will be operated by Nippon Yusen Kaisha (NYK Line).

The new vessel utilizes a unique hull form derived from the design and manufacturing capabilities, providing exceptional fuel efficiency and high compatibility to the various LPG terminals in the world. This is the 11th vessel in its LPG carrier series.