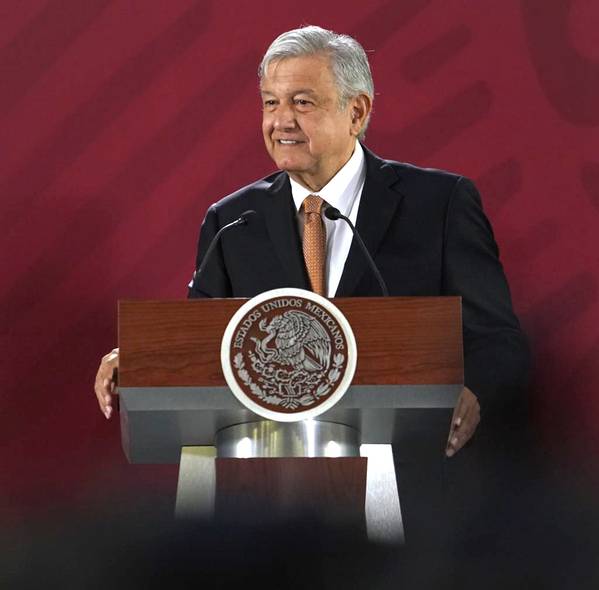 Ratings agencies and three managers spoken to by Reuters at funds that either hold Pemex paper or recently sold it said proposals floated by the government to build a new refinery and give the state a bigger role in the oil industry could put fresh strain on the company, which must pay back almost a third of its debt in the next three years.

Fitch and Moody's have in recent weeks flagged concerns about Pemex's $106 billion of financial debt - the highest of any state oil company in Latin America.

Under threat, said Shamaila Khan, director of emerging market debt at AllianceBernstein, which manages $550 billion in assets and invests in Pemex, is the company's investment grade rating.

"They are moving in that direction," Khan said, citing the plans to build a new refinery and to make Pemex do more exploration as risks.

If the rating goes, investors, including many pension and sovereign wealth funds whose mandates stipulate they must hold assets of investment grade quality, may have to dump Pemex debt, making it harder for the firm to raise capital.

Pemex did not respond to request for comment for this story. The finance ministry declined to comment.

The company, which also has $70 billion in pension obligations, said in its last quarterly report to end-September that its negative cashflow could affect its ability to operate and pay off debts.

It acknowledged a downgrade was a possibility and said external auditors raised doubts about the ability of the company to continue as a business, citing recurrent net losses, negative working capital and negative equity.

Energy Minister Rocio Nahle said Pemex had been driven into the ground by the policies of previous governments, and that it would be saved by a new administration focused on increasing output.

"How do we think we will pay the debt? By increasing production," she said in an interview with Aristegui Noticias on Tuesday, saying predecessors had sold assets but kept on increasing Pemex borrowing.

Lopez Obrador, who took office on Dec. 1, is already entangled in a dispute with bondholders behind a new $13 billion Mexico City airport that the leftist said he would cancel on the grounds it was tainted by corruption.

The move sent tremors through Mexican financial markets, hitting the peso and prompting warnings by ratings agency Fitch about Pemex.

"I sold my last holdings in Pemex a couple of weeks ago due to the whole populistic approach he had to the airport," said Dorthe Nielsen, an emerging market debt manager in Zurich at GAM, which manages assets worth 146 billion Swiss francs.

Created in 1938 with the expropriation of foreign oil assets, Pemex became a symbol of Mexican ingenuity at the outset of a golden age of economic growth and stability that lasted into the 1970s. Corruption, mismanagement and declining output have all since taken a heavy toll on the company.

Lopez Obrador, who harked back to the era known as the "Mexican Miracle" in his inaugural speech, has threatened to undo what he calls a neo-liberal 2013-14 energy overhaul that opened the oil and gas industry to private capital.

Pitched by the last government as a fix for falling production, the reform also made it easier for Pemex to team up with other firms. However, output is still declining.

On Sunday, Lopez Obrador announced tenders in March for the new refinery in the southern state of Tabasco. He also plans to upgrade existing refineries and expand drilling commissioned by Pemex.

He did not give details of how the projects would be financed, but said government spending on Pemex would increase by $3.7 billion in the 2019 national budget, due to be presented on Dec. 15.

Deputy finance minister Arturo Herrera has said Pemex would have to reassign funds if it were to pay for the new refinery.

Nielsen at GAM said if Pemex did not start selling assets, balance sheet pressure would intensify. A loss of investment grade, she added, would be "a disaster."

Fitch and Standard & Poor's rate Pemex's foreign currency debt BBB+, while Moody's puts it at Baa3, one notch above junk.

"The rating would not be that great, if it weren't for the consideration of the implicit support from the government," she said, adding that the company owed $7-$8 billion in 2020, and another $10 billion in 2021.

"On top of this, they are going to spend more money with the new investments." The yield on Pemex's September 2047 dollar-denominated issue has spiked more than 100 basis points since just before the July 1 election to bid at around 8.23 percent.

Audra Stundziaite, a senior credit analyst at Hermes Investment Management, said Pemex was facing many of the same challenges as Brazil's state-run Petroleo Brasileiro did three years ago when it lost investment grade.

Nielsen said: "Unless Lopez Obrador comes up with something much more business-friendly that's allowing the company to do joint ventures or bring in partners, there's no bright future."