The supplier of onshore drilling and workovers, wellhead maintenance services Simmons Edeco  has been awarded a contract by Tonalli Energia SAPI de CV to provide drilling services in Mexico.

Tonalli Energía, SAPI de CV, founded in 2015, is a joint venture between Grupo Idesa Group and Petrofrontera, a subsidiary of International Frontier Resources Corporation, to explore and produce gas and oil in Mexico.

The contract, which has already begun, engages Simmons Edeco  to support Tonalli’s onshore oil and gas development Block 24.  The Block known as Tecolutla, is in the Tampico-Misantla Basin in the Mexican state of Veracruz.

Simmons Edeco  will drill the horizontal well 2310 TVD to a measured depth of 3,750 meters by using Rig 836, which recently drilled a number of wells on the Amatitlan block in Mexico.

Although Simmons Edeco  has been providing onshore drilling services in Mexico since 2015, this drilling project represents the first time that the company will have worked on behalf of Tonalli Energia, a joint venture between Mexican petrochemical company Grupo IDESA and Canadian oil and gas company International Frontier Resources.

“This contract is significant for us because this will be the first time that we will be providing drilling services to Tonalli,” said Niels Versfeld, CEO of Simmons Edeco .  “Not only do we appreciate the opportunity to contribute to the safe and efficient expansion of the Tecolutla development, it reflects our continuing efforts to expand within the onshore drilling and workover sector of Mexico’s vibrant oil and gas industry. We look forward to cultivating a sustainable long-term relationship with Tonalli in Mexico.“

To support the Tonalli contract, Simmons Edeco  will draw upon specialist personnel and equipment located at its base in Poza Rica, Mexico. 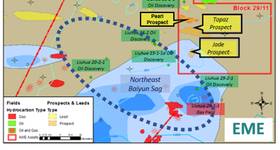 China: Empyrean Gets More Time to Drill at 29/11 offshore...