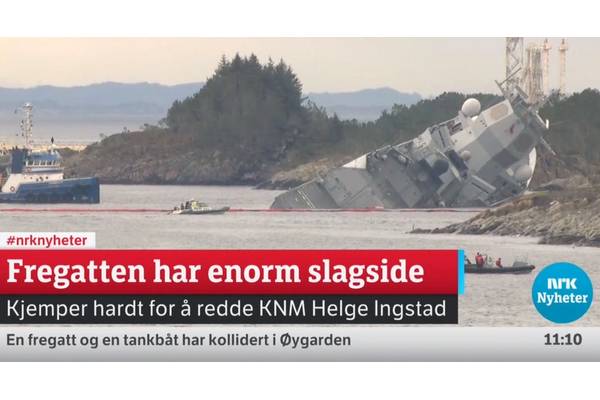 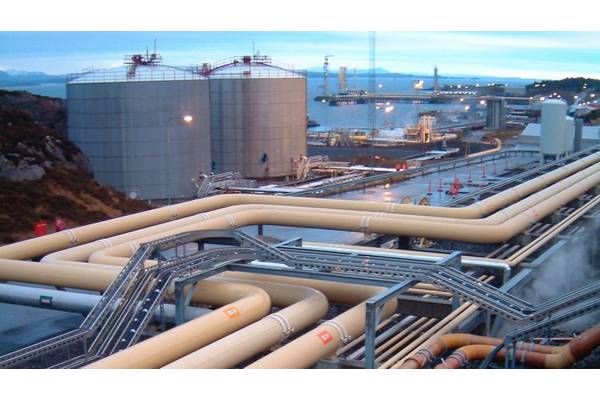 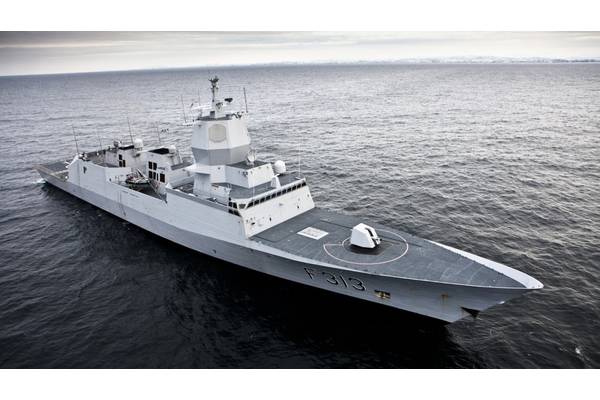 Norway has been forced to close the Sture Oil Terminal near Bergen and has started closing down the nearby Kollsness gas-and-condensate terminal — a lifeline of heating gas to Europe — after an early morning collision between a $440-million frigate and an oil tanker.

The frigate Helge Ingstad, now listing heavily to its port side, is loaded with torpedoes and weapons systems said to be unstable as a result of the collision. Eight navy personnel are said to be injured, including two flown to regional hospital, Haukland, but the tanker Sola’s 23 crew were all evacuated safely.

Spilling from the frigate is a slick of what is reportedly light oil and helicopter fuel, although Norwegian NRK reports there’s no immediate threat to the environment after oil barriers were put in place on Thursday morning. The coastal water where the stricken vessel lies is normally prone to heavy seas, but unseasonably calm conditions prevail.

“The frigate lost steering control and drove onto land with 137 people onboard,” Eirik Valle of the Norwegian Coastguard told NRK. The frigate could still capsize, the report said.

The Sture Oil Terminal processes about 500,000 barrels a day of North Sea oil, including oil from the Ivar Åssen, Grane and Edvard Grieg fields. The terminal, however, is linked by pipeline to the Kollsnes Gas Terminal, a major processor of North Sea and Norwegian Sea gas destined for receiving terminals in Germany and Belgium.

Heavy shipping traffic is the norm at Sture, where a quarter of all oil produced in oil-rich Norway is processed. The police, which investigate marine accidents in Norway, have cordoned off the area around the stricken frigate for fear of explosions.

Kollsnes, just west of coastal city Bergen, is also being shut down. Its plant processes gas from the Troll, Kvitebjoern, Visund and Fram fields, together about 135 million standard cubic metres of natural gas per day.

The Norwegian government shares ownership of the Sture terminal with some of the country’s largest oil producers, including Equinor.