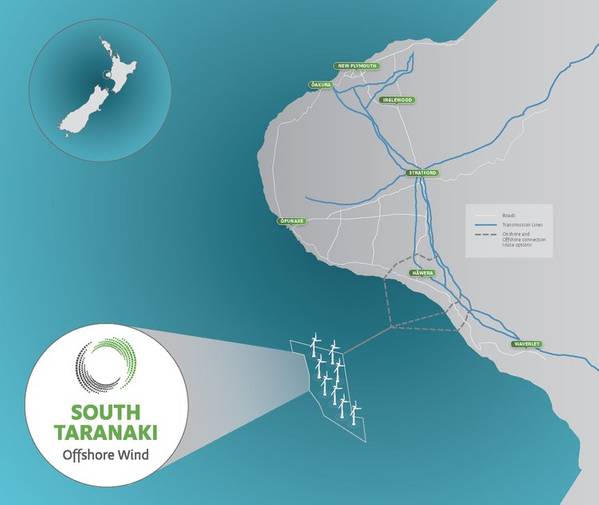 A consortium created in 2021 wants to build an offshore wind farm 22 kilometers off the coast of South Taranaki, New Zealand.

The consortium, comprising BlueFloat Energy, Energy Estate and Elemental Group, says this is the first of its four offshore wind projects planned in Aotearoa [Māori-language name for New Zealand] with the potential to add up to 5GW of new electricity generation.

The South Taranaki project is designed to be a ~900 MW offshore wind development using fixed bottom technology located to the west of Beach Energy’s Kupe platform in the South Taranaki Bight.

According to the consortium, the area is close to the only deep-water port on the west coast, Port Taranaki in New Plymouth, allowing easy access to build, import and transport materials required for construction and to service the specialized vessels required for installation and maintenance.

It has a relatively flat sea floor with a water depth of less than 50 meters suitable for fixed-bottom turbines, and a skilled local workforce with extensive experience in the offshore energy sector and transferable expertise.

The area also has a significant offshore infrastructure that could potentially be upgraded or repurposed for offshore wind, and is in close proximity to local industrial facilities where electricity can be converted to green hydrogen for use in transport fuels or as feedstock for green chemicals like urea, ammonia and methanol.

The consortium also sees further potential for floating wind farms to be developed in subsequent phases alongside the initial phase of fixed-bottom projects.

The proposed site covers approximately 230 square kilometers and sits beyond the 12-mile nautical zone and outside the boundaries of the West Coast North Island Marine Mammal Sanctuary and the sensitive eco-system of the Patea Reef.

In August the JV said that Beach Energy was facilitating the placement of a LiDAR (Light Detection and Ranging system) on its Kupe platform and sharing the data with several offshore wind developers.

The LiDAR measures a number of key data points such as wind speed, direction and consistency that will help inform the JV’s development plans.

The consortium also said that the visual simulations for the project have been launched. They've been produced by Plain Concepts, a worldwide technology pioneer in the use of a 3D graphics development engine "that realistically creates impressions of how the turbines will look from ten points along the coastline during the day and night."

These simulations are available on the project website: https://southtaranakioffshorewindproject.com/  (Click on the points on the map to get 3D simulation)

Simon Currie, Co-founder of Energy Estate said: “We want to be upfront and show coastal communities and users of the sea what our projects will look like. For this reason, we have prioritized preparing and releasing accurate visual simulations of our projects in New Zealand. The process to create the 3D simulation involves the use of panoramic photographs (taken by a local photographer) from a number of locations, trigonometry, data points and digital technology. The output is a realistic and a scientifically rigorous visual representation of an offshore wind project.”

District Mayor, Phil Nixon expressed his support for development of the offshore wind industry in South Taranaki in terms of the benefits it can bring to local economic development, employment and environmentally sustainable, cheaper energy for businesses.

“Offshore wind supports our transition to a lower emissions economy, and with the potential for partnerships with mana whenua and the development of initiatives such as a research and innovation hub will help ensure South Taranaki remains Aotearoa, New Zealand’s (sustainable) energy generator for the future.”

According to the press release issued this week, the project is conservatively estimated to create at least 600 jobs in construction, operations and maintenance and to create further employment opportunities throughout the supply chain. The electricity generated from 900 MW is the equivalent of powering nearly 440,000 householdes.

Commenting on the announcement, Anne Probert, Venture Taranaki GM Regional Investment said:"With strategic foresight and through our Taranaki 2050 and Tapuae Roa work, we identified the potential for offshore wind in Taranaki.

"Leveraging our energy expertise and partnerships, we have been able to catalyze the offshore wind opportunity, releasing the pioneering offshore wind report in 2020, and the subsequent offshore wind energy forums and we are now seeing it move moving closer to realization.

"Offshore wind will be a considerable future resource to provide large quantities of low-emissions energy while utilizing many of the complementary skills and resources in Taranaki that service the existing energy sector in New Zealand.”

The project is currently in the feasibility stage, but the partnership says it believes that construction could start before 2030. 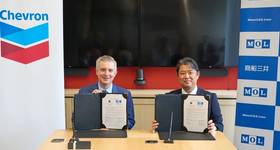 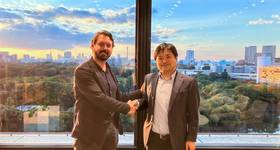