Yesterday’s or Tomorrow’s Offshore Energy: Which to Pick?

Rik van Hemmen is the President of Martin & Ottaway... 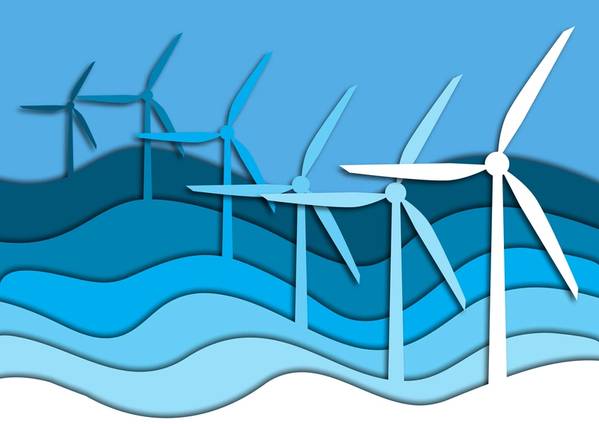 Looking back, it is easy to wonder if one could have done better by taking the other fork in the road. I grew up in Holland in a maritime family and am pretty sure I would have stuck with maritime there. In 1968, when I was 8 years old, my father left Holland America Line and joined the United States Salvage Association. At the same time, their main customer, the U.S. marine insurance industry, became heavily involved in the development of North Sea offshore oil and gas, and it resulted in an economic boom that made USSA’s Rotterdam office wildly profitable. My father had become the Rotterdam office manager; and, in 1976, somehow U.S. headquarters thought that his transfer would bring the boom to New York.

So, my family moved to the United States and, after a one-year U.S. high school career, I went to Virginia Tech and became embroiled in U.S. maritime rather than Dutch maritime.

Would I have done better in Holland? Possibly, but I doubt it. Dumb luck has very much driven my life since arriving on these shores, but offshore energy got me here.

Offshore energy has been a wild ride.

Back in Holland my father would occasionally take me on offshore drill rigs on weekend survey jobs, and I loved it because the roughnecks would always show me the soft ice cream machine and told me to help myself. Man, those rig workers were cool!

It will all be gone in a few decades.

Fortunately, that does not bother me at all because the future is bright and exciting. The latest James Bond is dead, but I am sure the new Jane Bond will end up in some fight on an offshore wind farm or offshore wave energy converter. Just imagine that blade swinging by within inches of her head until she manages to put the villain in the path of the next blade. And then she will inflate a life raft with champagne and … Sorry, got distracted there.

Offshore oil will not disappear overnight, but it is reasonable to expect offshore oil exploration and development to decline to a fraction of its present size. Gradually declining oil exploration will result in the loss of specialized equipment, but a very significant part of the technology and its workers will find employment in sustainable offshore energy development.

At the moment, the ability to enter sustainable offshore energy development is still wide open, particularly Wave Energy Conversion (WEC). Initially, WEC is technically more challenging to achieve commercial viability, but recent developments have shown that it can potentially be more cost effective than offshore wind.

It is troubling to note that oil companies with offshore development experience have not been more aggressive in WEC. There have been some attempts that were supported by oil companies, but these efforts were technically and economically misguided and timid from an investment point of view. If offshore oil companies do not join the game soon, they will be left out and will have little opportunity to transition and will have to initiate corporate endgame (liquidation) strategies.

Offshore wind is a given, but at this time it is still quite expensive compared to other sustainable technologies. To some extent the offshore oil industry is at fault for the increased cost and limited rate of progress on offshore wind, especially in the United States. At the genesis of offshore oil in the 1960s, there were very few regulations and very little oversight; but due to environmental mishaps, the level of review, public review, and regulation has increased tremendously. This process transferred to offshore sustainable energy projects and is cumbersome and expensive.

While offshore wind is relatively expensive, the co-location of offshore wind and WEC is an excellent efficiency multiplier, reducing the cost fractions of leasing, permitting, and shore infrastructure costs, and extending the availability window of offshore sustainable energy generation when the wind does not blow.

The single most significant obstacle to offshore wind is public resistance to visual pollution. None of the large offshore wind projects in the United States have fully made it past the public acceptance point. If and when there is public acceptance for the first major project, the entire process will accelerate with rapidly reducing costs and rapidly increasing capacity.

WEC is not as sensitive to public resistance, since it is virtually invisible from shore. It will inherently reduce wave impact on shores, which is actually a benefit with rising sea levels. This may be resisted by surfers, but there are excellent alternatives.

The SurfWEC concept uses a breaking wave generator. If an offshore wave farm dedicates a small percentage of its breaking wave generators to surfers, it could result in an entire offshore surfing industry with much larger optimal wave condition windows and improved surfing on many coasts without harassment from private or limited access beach interests.

There will be some wildlife impact, particularly with regard to offshore wind. I have not seen any studies that would indicate the effect would be devastating, but offshore oil impacts wildlife too.

There may not be a large amount of resistance from recreational fisherman to sustainable offshore wind. They are familiar with the productivity of artificial marine structures. Commercial fishermen will resist offshore wind and WEC simply because they have not yet developed a personal vision of their future. Sustainable fishery practices are still in their infancy as far as commercial fisheries are concerned and to alter the traditional hunter gatherer mindset to a mindset that more closely resembles a sustainable ranching mentality will take time. However, if I were a betting man, I would bet on the overall benefit of harvest free zones in littoral waters that can function as nurseries to increase overall yields.

In the end, the central question should be “How will offshore sustainable energy benefit us all?” There are many encouraging indications:

Offshore oil was a great ride, but I am picking sustainable offshore energy this time around.

For each column I write, Maritime Reporter & Engineering News has agreed to make a small donation to an organization of my choice. For this column I nominate the Sierra Club www.sierraclub.org. It fights for realistic tradeoffs between clean energy and nature preservation.