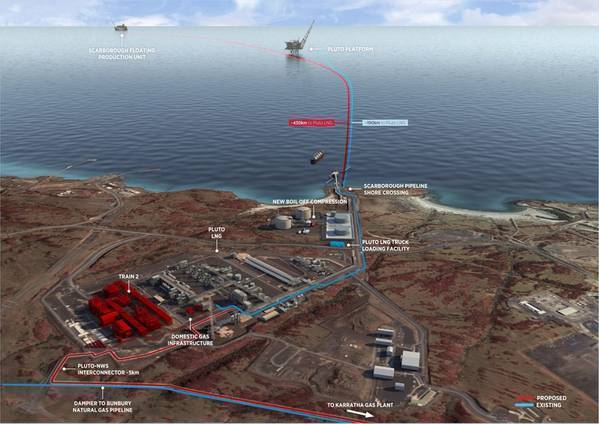 Australia's Woodside Petroleum on Monday took a big step toward funding its biggest growth project, announcing the sale of a 49% stake in the planned expansion of its Pluto liquefied natural gas (LNG) plant in Western Australia.

In a statement, Australia's biggest independent oil and gas firm said it had agreed to sell a 49% stake in a planned second processing unit, or 'train', at the Pluto LNG plant to private equity firm Global Infrastructure Partners (GIP).

Woodside has been looking for nearly two years to lock in the sale of the stake ahead of making a final investment decision by Dec. 15 on the $12 billion combined Scarborough gas project and Pluto LNG expansion, which will super-chill gas from the Scarborough field for export.

Under the agreement, GIP will pay its 49% share of the $5.6 billion construction cost of Pluto Train 2, plus a further $835 million. The $835 million could be reduced if costs on the project blow out or if the project is delayed, while if costs come in under budget, then GIP will reward Woodside.

"The sale of the interest in Pluto Train 2 is a significant milestone as we progress towards a final investment decision on our Scarborough development, further de-risking this globally competitive investment," Woodside CEO Meg O'Neill said in a statement.

The deal also includes provisions for GIP to be compensated for emissions liabilities against an undisclosed baseline. GIP will earn revenue from an undisclosed toll that the Pluto LNG plant will charge to process Scarborough gas.

Woodside shares rose as much as 1.8% after the announcement, while its peers were flat to weaker.

Credit Suisse said that while Woodside had achieved a key milestone, the company was taking on a degree of construction risk for up to a 30% cost blowout on the project.

"This is despite management indicating in the past that (Woodside) would share all risk with any new partner," Credit Suisse analyst Saul Kavonic said in a note.