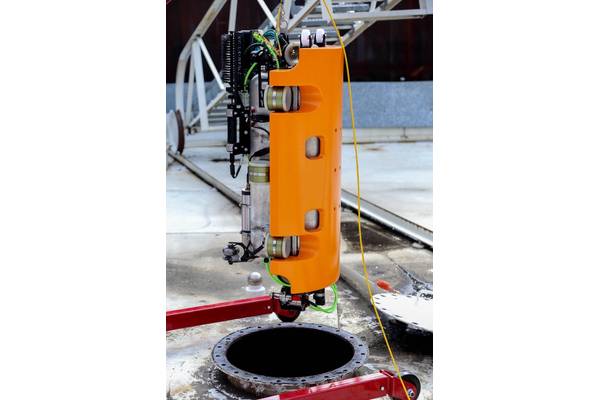 The Nortek DVL1000 leads the way as the inspection vehicle enters a tank. The DVL operates to a high degree of accuracy in the harsh environment inside. Image courtesy Nortek/Square Robot 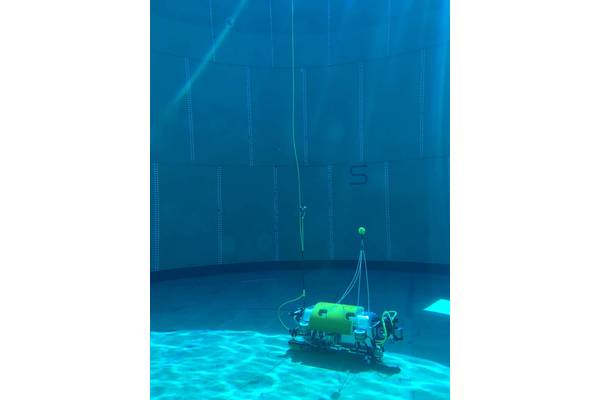 Testing the Square Robot vehicle in a test tank filled with water. The DVL1000, seen on the right, is mounted so it can work unobstructed, while maintaining a minimum distance from the floor. Image courtesy Nortek/Square Robot

An autonomous robot outfitted with a DVL is looking to revolutionize fuel tank inspection – while eliminating potential operational hazards.

Using the robot eliminates the need to empty the tanks of liquid so that humans can enter to carry out detailed inspections – a costly, time-consuming and potentially hazardous procedure still used in most tank assessments.

Founded in 2016, the company took just two years to design and build a highly robust autonomous robot certified to operate in these hazardous environments. Five versions of the robot are now being deployed by firms in the U.S. petrochemical storage sector.

The “Square Robot,” from which the company takes its name, is a highly robust, autonomous robot laden with sensors, able to fit through the 24-in. “manway,” the standard-size portal fitted to the top of storage tanks.

The robot is then able to navigate through the liquid-filled tank – typically gasoline or diesel – to detect damage such as corrosion on the tank floor. The tanks, a familiar sight for many, are typically 10–30 m tall and 15–80 m in diameter.

“The robot essentially performs a floor inspection of the tank that would otherwise have to be done by a human,” said Amy Underwood, Senior Roboticist at Square Robot.

“During a traditional out-of-service inspection, the tank is emptied, cleaned to make it safe for entry, then inspected by personnel. All of this downtime means a significant loss of revenue for the tank owner. Our robot gets rid of all that – your tank is still in service and full of product,” she said.

The vehicle is innovative in that it carries out tests in a way that won’t damage the tank – so-called non-destructive testing (NDT) – using technologies such as ultrasonic testing (UT), which can characterize the thickness and internal structure of a surface using high-frequency sound waves. Additionally, the robot is capable of hovering, unlike “crawler” robots sometimes used for basic inspections. 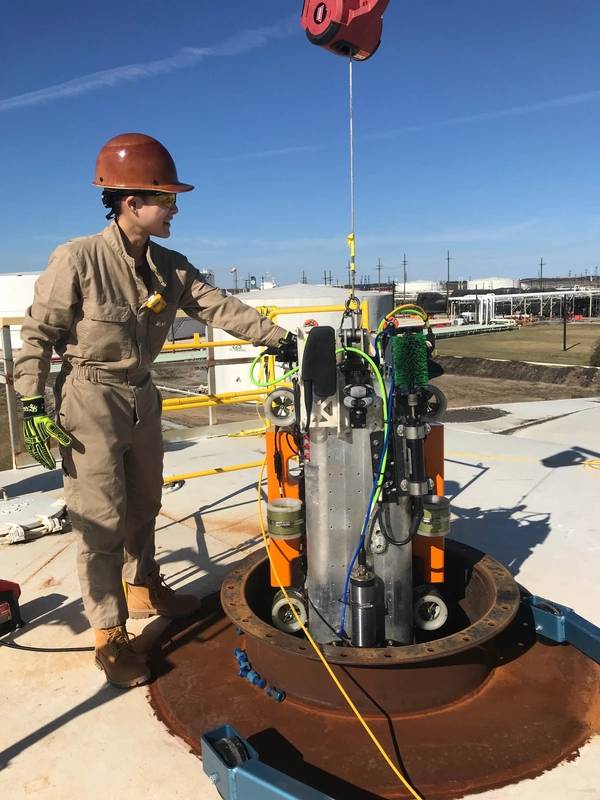 The Square Robot vehicle with the four-transducer Nortek DVL1000 mounted at the extreme left. The vehicle deploys ultrasonic testing, HD cameras and other non-destructive methods to assess tank wear and tear; the assessment depends on the DVL for pinpoint positioning. Image courtesy Nortek/Square Robot

But in order to precisely examine and map areas of concern, the robot needs to know exactly where it is in the tank. That requires accurate velocity measurement to aid navigation in a critical way – neither of which is straightforward in an enclosed tank full of liquid product.

To solve the problem, the company looked to its roots in the subsea industry. Square Robot’s founders and several other team members previously worked at a leading AUV developer and have had long careers in the subsea industry. So, they already knew what worked well for velocity measurement in the ocean and wondered whether it could be made to work in the harsh environment of a storage tank.

“We needed high navigational accuracy, and knew DVLs could provide this from our background in subsea,” says Underwood.

DVLs use the Doppler effect to calculate velocity by measuring the shift in wavelength between acoustic pulses transmitted to and reflected back from particles in a liquid or a surface such as a seabed.

The team were familiar with Nortek’s Doppler velocity logs. Crucially, Nortek’s 1 MHz DVL1000, the instrument Square Robot decided on, could operate accurately at a distance of only around 20 cm from a given surface – often the seabed, but in this case the tank floor. That is closer to the floor than many other DVLs on the market are capable of operating accurately, and a prerequisite for the inspection vehicle to do its job properly.

The fact that this DVL performs so well in such a difficult environment can be attributed to Nortek’s proprietary bottom-tracking algorithm.

Testing the Square Robot vehicle in a test tank filled with water. The DVL1000, seen on the right, is mounted so it can work unobstructed, while maintaining a minimum distance from the floor.

Square Robot is seeking to expand its operations both in the U.S. market, where it currently operates, and internationally. The robot is currently deployed through Square Robot’s subsidiary inspection services company Veritank.