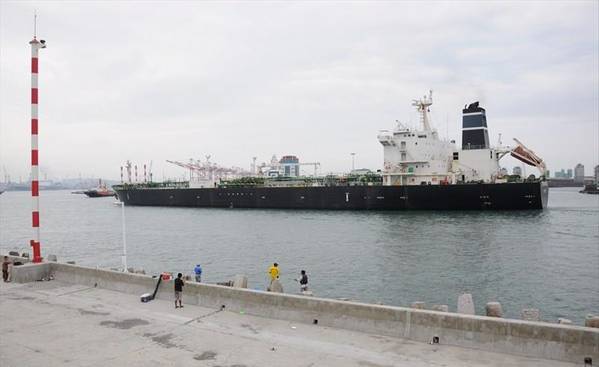 The Cambodian government is seeking the return of an oil tanker and its crew who have been detained in Indonesia, alleging that the ship had loaded oil illegally from an offshore oil field, a government official said on Thursday.

The Bahamas-flagged tanker MT Strovolos and its crew were detained in waters near the Anambas islands of Indonesia on July 27, the Indonesian Navy said in a statement.

The vessel is carrying Cambodia's first-ever oil production from an offshore oil field which began operation in December 2020. However, the cargo has been stuck onboard the tanker since May as the project developer KrisEnergy entered liquidation in June after being unable to pay debts.

"I am worried," Cambodia's Ministry of Mines and Energy spokesman Cheap Suor said. "We have already requested (for) a long time to send them back, the oil, the vessel and the crew who stole it, and left without permission from the Cambodian authorities."

Indonesia's navy is preparing to charge the captain of the ship for loading oil illegally in Cambodia and anchoring in Indonesian waters without permission, according to local authorities and the vessel owner.

The stop followed a red notice issued by the Cambodian embassy on July 24 that asked Indonesian authorities to make an arrest on suspicion of stealing around 300,000 barrels of Cambodian crude, the Indonesian Navy said.

The vessel was taken to Batam for quarantine on July 30.

The captain of the ship, a Bangladeshi, has been named a suspect for anchoring without permission in Indonesian waters, the Navy said, adding it was working with local prosecutors on the case.

World Tankers Management, operators of MT Strovolos, confirmed the detention of the tanker and crew members.

"We regret to report that some members of the crew have been detained ashore by the Indonesian authorities and remain so detained whilst the remaining crew are stuck on board the vessel unable to disembark," the company said in a statement late on Wednesday.

World Tankers denied the oil had been loaded illegally and that the ship did not have permission to anchor in Indonesian waters.

The ship had arrived at the field in November and was used as a storage facility for the field's production, which halted when the ship reached capacity, said a source familiar with the project who declined to be named as he is not authorized to speak to the media.

MT Strovolos loaded crude oil from the Apsara field in the Gulf of Thailand on May 21, based on the understanding that the cargo belonged to charterer Kris Energy (Apsara) Co Ltd - KrisEnergy's Cambodian arm - World Tankers said.

However, the charterer defaulted on payment and failed to supply fuel to the ship when its fuel levels fell critically low, World Tankers said, adding that the vessel had to carry out a crew change as most of the staff had been onboard since September 2020.

Kris Energy terminated the ship's service when the vessel had called at Thailand for crew change and refueling, but was unsuccessful, World Tankers said.

Subsequently, MT Strovolos sailed to Batam, Indonesia, to make a crew change, but was detained by local authorities, the company said.

KrisEnergy said on June 4 it was unable to pay its debts and would proceed to liquidation.

KrisEnergy has a 95% stake in the field while the Cambodian government holds the remaining 5%.

The Thai Navy, KrisEnergy and its liquidator did not respond to requests for comment.