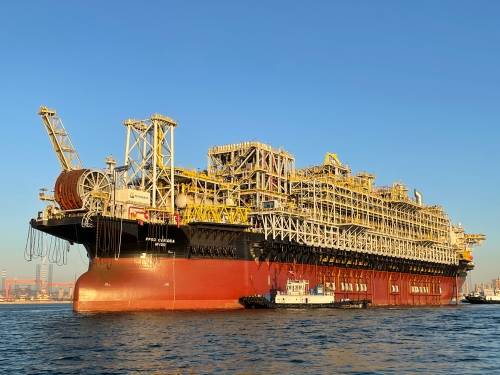 Chinese shipbuilder Cosco Dalian has completed the construction of the Carioca MV30 FPSO for Japan's Modec.

The 332 meters long Carioca FPSO - converted from Flandre VLCC - will be deployed at the Sépia field operated by Petrobras, located in the “pre-salt” region of the Santos Basin some 250 kilometers off the coast of Rio de Janeiro, Brazil at a water depth of approximately 2,200 meters.

The contract for the delivery of the FPSO was awarded to Modec in Oct 2017. According to World Energy Reports, while conversion work was done by Cosco Dalian, the topsides modules fabrication was awarded to several facilities in China and Brazil.

To remind, Keppel FELS Brasil in 2018 won a contract with Modec undertake the topside module fabrication and integration of the FPSO Carioca MV30.

Sofec will supply the spread mooring system. McDermott has the EPCI contract for subsea risers and flowlines.

Per World Energy Reports, a monthly publication focused on the FPSO market, the charter + operating fee for the Carioca MV 30 FPSO is understood to be around $720,000 per day

MarineTraffic data show the FPSO is currently at anchor near Dalian, China. Per AIS, the FPSO's next destination is Singapore, where it is expected to arrive in the first week of December.