Living quarters and eigh pipe rack modules have been lifted aboard the Energean Power FPSO hull as the construction of Energean's FPSO destined for the Mediterranean Sea progresses in Singapore.

The FPSO hull, built in China is being outfitted with topside modules at Sembcorp’s Admiralty Yard, Singapore. Once completed the FPSO will sail away to Israel, where it will be used to develop the Karish offshore gas field.

The LQ module lifted on the hull is 20 meters long, 40 meters wide and 26 meters high, weighs in at 1,727 tonnes, and has seven decks. It is designed to accommodate 70 people during normal operations in single occupancy, fully integrated cabins; occupancy can be increased to 120 people during heavy maintenance periods by increasing most cabins to double occupancy.

The pipe rack modules are typically 25 meters long, 6 meters wide, and 14.5 meters high, and 6 meters wide, each weighing in between 120 and 210 tonnes. The Sembcorp Marine crane barge L-3601, which has a lifting capacity of 3,600 tonnes, has been used in the operations. 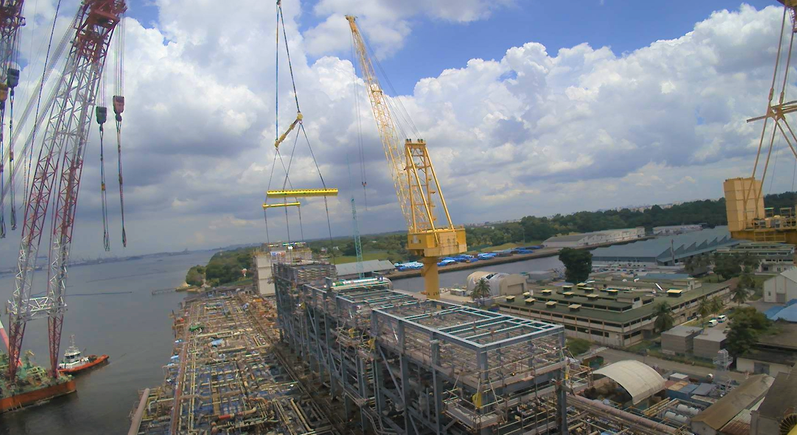 According to Energean, the pipe racks are designed to carry interface piping between the various modules and hull systems and provide space for the location of cable trays connecting the modules to the electrical house and instrument technical room.

The Energean Power FPSO is scheduled to sail away from Singapore to Israel in summer 2021. Following its arrival in Israel, the FPSO will be connected to 14 mooring lines which have already been installed by TechnipFMC

TechnipFMC, as the main EPCiC Contractor for the Karish development project,  engaged the heavy lift crane vessel “Jumbo Fairplayer” for the installation of the 14 mooring lines. The mooring lines were pre-laid and wet-stored prior to the arrival of the Energean Power FPSO.

The Karish development project is on track to deliver first gas in 2H 2021.

Energean in September signed agreements to sell more gas from the Karish gas development, increasing total firm contracted gas sales from the project to about 7.0 bcm/yr on plateau.