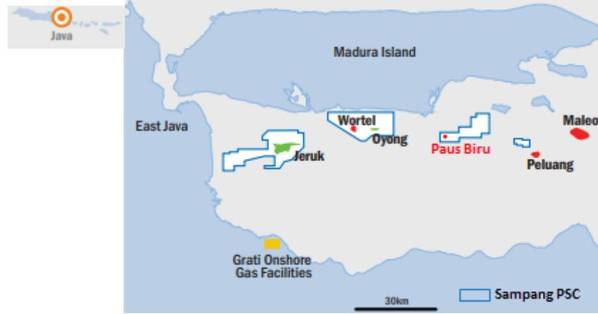 Indonesian oil and gas regulators have approved the plan of development of the Paus Biru offshore gas field in the East Java Basin.

The field is located in the Medco-operated Sampang offshore block, in the Madura Strait,  off Madura Island, Indonesia. Apart from the Paus Biru field, the offshore block also contains the producing Oyong and Wortel fields.

Cue Energy, a partner in the project has said that SKK Migas, the Indonesian upstream regulator, has now given its approval for the development of the field.

The field was discovered by Ophir Energy in December 2018 during successful drilling of the Paus Biru-1 exploration well. Medco then became the operator after buying Ophir Energy in 2019.

The approved plan of development consists of a single horizontal development well with an unmanned wellhead platform (WHP), connected by a subsea pipeline to the existing WHP at the Oyong field, approximately 27km away.

From the Oyong WHP, gas from Paus Biru will be transported using the existing pipeline to the Grati Onshore Production Facility, which is operated by the Sampang PSC joint venture, where it will be processed.

The joint venture will now proceed into the Front End Engineering and Design (FEED) phase and negotiation of gas sales agreements. A Final Investment Decision (FID) for the development is expected to be taken by the joint venture mid-2021, with first gas expected late 2022.

Cue Energy CEO Matthew Boyall: "Paus Biru development planning will proceed through FY21 with a Final Investment Decision targeted for Q4 and first gas expected in calendar year 2022. This development will not only provide its own cashflow to Cue but also support and extend the existing production from Oyong and Wortel."