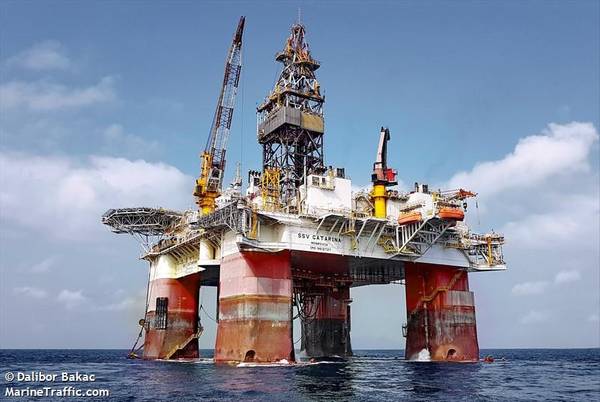 This was revealed by Singapore-based KS Energy, which last year won the contract with Eni, as part of a joint venture with Universal Energy Resources.

According to data by VesselsValue, which has yet to take into account the suspension, the ultra-deepwater rig, owned by Brazil's PetroServ, started the $220,000 a day charter with Eni in Indonesia in November 2019 and was supposed to stay with the Italian company until October 31, 2021.

KS Energy announced the info on the suspension on Thursday, as part of its quarterly report.

The company said: "A significant challenge for the business in Indonesia during the COVID-19 pandemic has been the movement restrictions of rig crew and client’s third-party personnel to and from our offshore rigs.

"Operations on the sixth-generation semi-submersible drilling rig “SSV Catarina” were suspended, and the rig was moved to a safe anchorage at Balikpapan on 20 March 2020. The company will release further announcements as and when there are material developments."

It has implemented cost-saving measures including salary adjustments, with an overall 30% reduction in the pay of senior executives, from the month of March.

"Whether these measures are scaled up or extended in time would depend on how the situation develops as the pandemic is highly uncertain in terms of the length and depth of its economic impact," KS Energy said.

The company is currently operating rigs in Indonesia and offshore Vietnam, and its drilling rig in Egypt recently completed its contract and has returned to Alexandria Port.

KS Energy has joined a plethora of offshore drilling companies that have recently had their contracts suspended, terminated, or cut short, due to a double whammy from the coronavirus pandemic and the crash in oil prices.