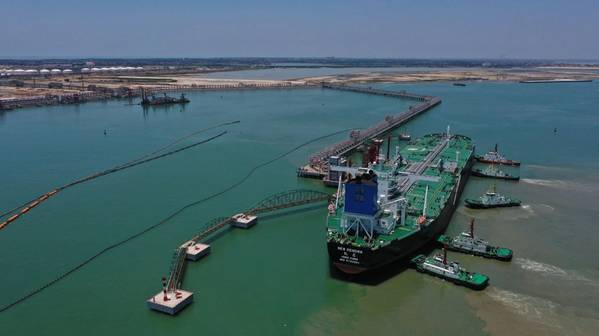 China's energy and chemical giant Sinopec has said it has put China's largest petrochemical port into operation with the successful docking and unloading of the New Renown, a very large crude carrier (VLCC) from the Middle East.

"To date, the 100,000-ton berth is the largest domestic refined oil terminal with a loading and unloading capacity of 5.61 million tons per year. The terminal provides convenient access to refined oil and chemical products for Sinopec's core domestic market, while also offering direct opportunities for global exports and enhancing Sinopec's competitiveness within the industry," Sinopec said.

The total investment of the first phase of the project totals more than 40 billion CNY and will add over 10 million tons of refined crude oil capacity and 800,000 tons of ethylene units per year, in addition to auxiliary supporting facilities.

At present, there are more than 18,000 builders currently working on-site as part of the project, and 28 of the 30 major production facilities have been delivered. The final project is expected to be fully completed and put into production by the end of July, Sinopec said.