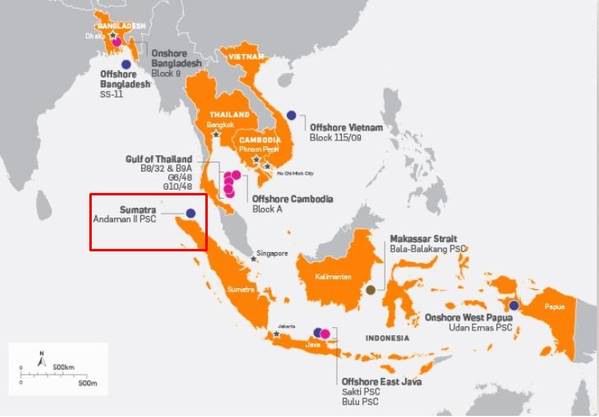 KrisEnergy said that the previously proposed disposal of the block in the Malacca Strait was completed on Wednesday.

"The consideration for the disposal is US$15.0 million, subject to a retention sum of US$1.7 million which may be used by the buyer to offset against any payment obligations that may become due by the seller from the completion date until 31 December 2021," KrisEnergy said.

Under the terms of KrisEnergy's revolving credit facility with DBS Bank Ltd, the proceeds from the sale will be held in a collection account over which DBS has security.

"The company will provide further updates on the use of proceeds as and when necessary," KrisEnergy said.

The Andaman II PSC is an exploration block over the North Sumatra Basin covering an area of 7,400 sq. km.

Announcing the deal with BP back in late 2019, KrisEnergy explained it had decided to sell after taking into consideration the future exploration cost and risks associated with deepwater activities.

The company at the time said its board believed it was more prudent to allocate KrisEnergy’s limited capital at its existing producing assets in Bangladesh and the Gulf of Thailand and progressing the development of the Apsara oil field in Cambodia block A.