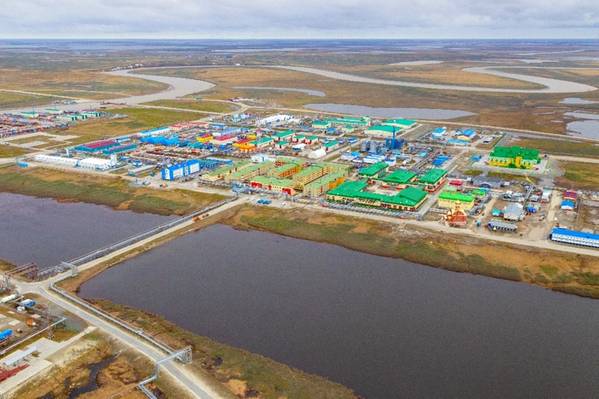 Gas giant Gazprom said on Thursday 20 workers have been quarantined at Bovanenkovo gas field, which feeds the Nord Stream pipeline and is a key source of Russian gas supplies to Europe, after contact with a person who has coronavirus.

The outbreak of the coronavirus has forced many Russian commodity-producing companies to put in place measures, including longer shifts, at far-flung mines.

Gazprom's subsidiary, Gazprom Dobycha Nadym, said contact with the infected person occurred on a flight on March 16 and the isolation will last until March 30. Production has not been affected.

The workers were flying from Moscow to the city of Yekaterinburg, it said. Tests for the coronavirus from one of the passengers came back positive.

The workers arrived in Bovanenkovo from Yekaterinburg on another flight on March 17. A company source said they were part of a shift of 160 people, who live in two dormitories, and they all are under medical surveillance now.

Two of the 20 workers show symptoms of acute respiratory viral infection, RIA news agency said, citing regional medial authorities but another senior source at the company said the two have mild symptoms, such as a running nose, and no cough.

Bovanenkovo is the largest gas field in the Arctic Yamal peninsula, a major source of minerals.

The initial reserves of the field, launched in 2012, were valued at 4.9 trillion cubic meters, enough to procure gas for the entire planet for more than a year.

Gas production at the field stands at over 100 billion cubic meters (bcm) per year, a fifth of Gazprom's total, with peak output seen at 115-140 bcm per year.

As of March 26, Russia has 840 confirmed cases of COVID-19, relatively low in comparison to some other countries, and three coronavirus-related deaths.

The regional authorities of Russia's mineral-rich regions of Yamal and Yakutia have recommended producers extend shifts for workers to up to three months from a usual one-month shift as protective measures from the spreading of the virus.

Gazprom and its oil-producing arm, Gazprom Neft, have declared plans to extend the shifts at its Yamal outlets.

Among other companies, which followed the recommendations to increase the shifts, are coal-producing Elgaugol, a subsidiary of Mechel, and Rosneft's Taas-Yuriakh.

Mine operator Kinross Gold Corp of Canada, which produces gold and silver in Russia, isolated its Kupol mine complex last week, due to a coronavirus scare. Two suspected tests came back negative.