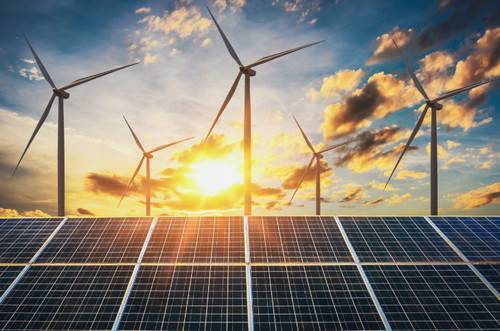 Wind and solar power: much more power needs to be generated from these sources in order to meet the targets set for 2030 by the Paris Agreement on climate change, according to DNV GL. (Photo © Adobe Stock / lovelyday12)

According to DNV GL’s latest energy report ‘Energy Transition Outlook: Power Supply and Use’, eight times more wind and solar power is needed by 2030 to help meet the Paris Agreement on climate change’s target. This transition will require more than ten times power generated by the solar means and five times the wind power currently being generated in combination with other technology measures to limit global warming to well below 2 degrees and meet the targets of the Paris Agreement. The report saysthe energy transition is gathering pace more quickly than previously thought but that the rate is still too low to limit global temperatures from rising by much less than 2 degrees as set out in the Paris Agreement. In fact, at the pace projected in the report, DNV GL’s forecast indicates that global warming is most likely to be 2.4 degrees warmer at the end of this century than in the immediate pre-industrial period. The report adds, however, that the technology to curb emissions enough to hit the climate target already exists and that what is needed to ensure this are far-reaching policy decisions.

DNV GL recommends that a number of technology measures are put in place to help close the gap between the forecasted rate at which the global energy system is decarbonizing and the rate of change that is needed to limit global warming to much less than 2 degrees as set out by the Paris Agreement, including growing solar power by more than ten times to 5TW and wind by five times to 3TW by 2030, which would meet 50 percent of global electricity use per year; a 50-fold increase in the number of batteries being produced to, in turn, enable 50 million electric vehicles per year to be produced by 2030, as well as new excess electric energy storage solutions;  new infrastructure for charging electric vehicles on a large scale; $5.1 trillion of investment in power grids; global energy efficiency improvements; the use of green hydrogen in heating and transportation applications; increased use of electricity and electricity storage solutions in the heavy industry sector; greater use of heat pump technology; extensive increases in the use of rail transportation for both goods and passenger traffic; and the rapid and wide deployment of carbon capture, utilization and storage facilities.

According to the DNV GL report, renewable energy will provide almost 80 percent of the world’s electricity by 2050 but says that despite this rapid pace, the energy transition is not occurring fast enough. The report forecast indicates that for a 1.5 degree warming limit, the remaining carbon budget will be exhausted by 2028 and that there will be an overshoot of 770 Gt CO2 in 2050.

The report, however, says that the target can be reached and that the energy transition is affordable, with the world spending a continually decreasing share of GDP on energy due to the rapidly decreasing costs of renewables and other efficiencies, which is enabling even greater investment to accelerate the transition.