Port of Johnstown to Receive 12 Shiploads of Wind Turbines 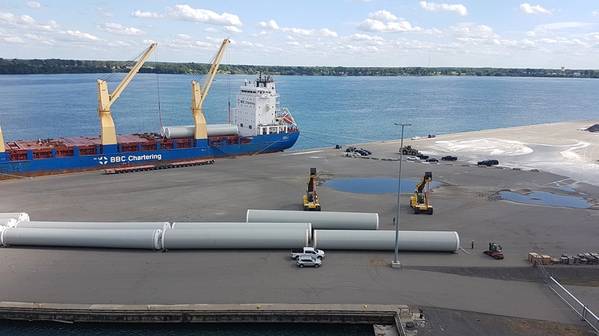 The Port of Johnstown will be a busy port over the next several months as vessels are delivering ENERCON turbine components for the Nation Rise Wind Farm project.

The cargo represents a major business win for the Port, which completed a multi-million-dollar infrastructure project in 2016 that included several acres of laydown space to be able to accommodate this type of heavy-lift cargo.

The first vessel, the BBC Kurt Paul, arrived August 13, 2019. In total, 12 vessels are expected to arrive over a 10 to 12 week period to deliver the components for this wind energy project.

Located approximately 40 kilometers southeast of Ottawa, Ontario near the South Nation River, the Nation Rise Wind Farm features 29 ENERCON wind turbines and is situated in the Municipality of North Stormont within the United Counties of Stormont, Dundas and Glengarry.

Edwardsburgh Cardinal Mayor Pat Sayeau said: “For the past two years, the port has really started to reap the rewards of investing in its infrastructure with a number of new business wins. Earlier this month, the port was awarded a further $4.8 million from the federal government for upgrades that will also improve the efficiency of grain exports for the region’s farmers. The port is integral to the success of our local and regional economies.