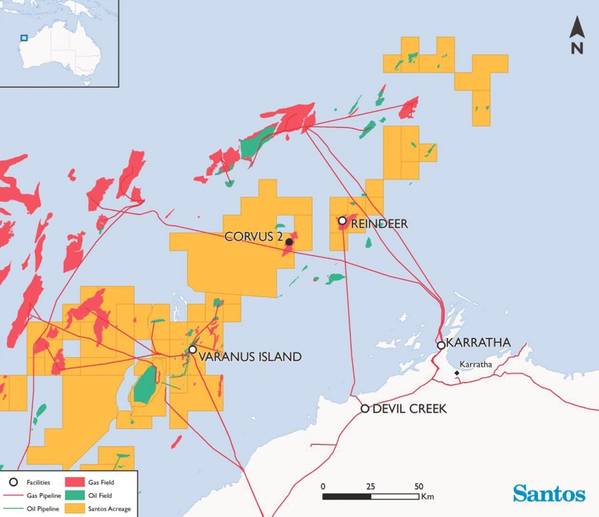 Santos announced Tuesday it has confirmed significant gas resource in the Corvus-2 appraisal in the Carnarvon Basin, offshore Western Australia.

Corvus-2 is located in 63 meters water depth, approximately 90 kilometers northwest of Dampier in Commonwealth waters within petroleum permit WA-45-R, in which Santos has a 100% interest.

According to Santos, the well intersected a gross interval of 638 meters, one of the largest columns ever discovered across the North West Shelf.

Wood Mackenzie senior analyst Daniel Toleman said the find could be largest gas discovery in the Carnarvon basin since the Satyr-4 exploration well drilled by Chevron in 2009. "Based on limited information, our initial estimate is a 2.5 tcf gas and 25 mmbbl condensate resource," he said.

Santos said wireline logging to date has confirmed 245 meters of net hydrocarbon pay across the target reservoirs in the North Rankin and Mungaroo formations, between 3,360 and 3,998 meters. These figures indicate a very large gas resource in place, Toleman said, but added, "recoverable volumes will be dependant on the size of the structure, area extent and sand thickness."

Higher permeability zones than encountered in Corvus-1 have been observed from initial pressure sampling completed in the well. Compared to Corvus-1, initial samples acquired from Corvus-2 indicate a significantly higher Condensate Gas Ratio of up to 10 bbl/mmscf and a similar CO2 content of 7%, Santos said.

The well will be plugged and abandoned once logging operations are completed, and Gallagher said the Noble Tom Prosser rig will move north to commence the Dorado appraisal program.

Gallagher also noted that Corvus-2 opens up a number of additional exploration opportunities in the region.

The Corvus field is approximately 28 kilometers from the Reindeer platform, which delivers gas to the Devil Creek domestic gas plant near Karratha, and about 62 kilometers to a Varanus Island tie-in point. Santos has a 100% interest in all these facilities.

“Corvus could be tied back to either our Devil Creek or Varanus Island gas plants, where it has the potential to increase the utilization of our existing facilities as well as provide backfill and extend plateau well into the 2030s,” Gallagher said.

Toleman agrees. "Quadrant's exploration portfolio is shaping up to be a good buy for Santos," he said. "Dorado was the third largest oil discovery in Western Australia's history, and Corvus is likely to be Santos' largest offshore gas discovery ever."

If the resource comes in over 2 tcf, Toleman expects Santos will explore opportunities to export the gas as liquefied natural gas (LNG) due to Corvus' proximity to the Burrup Peninsula, and a well-supplied domestic market in the short-to-medium term.

"The North West Shelf has LNG production capacity available from 2021. The Corvus discovery could fill this ullage," Toleman sad. "If an LNG backfill development is to progress, we expect Santos will look to sell down, as it currently holds 100% in the find. One of the North West Shelf partners would be a logical entrant."