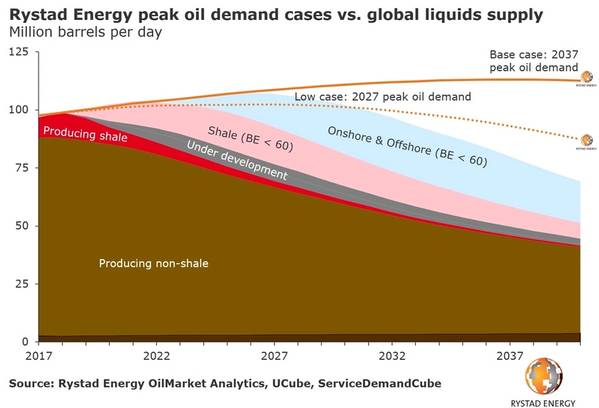 Oil majors are readying themselves for the energy transition by investing in shale and waiting for renewable technology to be economical, said Rystad Energy, energy research and business intelligence company.

A recent review of 2019 capital budgets reveals that oil majors are the only group to increase shale expenditure from 2018 to 2019.

Big companies such as Chevron and ExxonMobil recently announced plans to significantly ramp up production in prolific shale basins, such as the Permian Basin spanning Texas and New Mexico.

He added: “Shale offers the obvious benefits of being repetitive in nature, having fast payback and high return profiles. However, majors also understand that peak oil demand might not be far off.Once this point is reached, majors with cash reserves will be in an advantageous position to become first movers in the new renewable energy paradigm.”

Rystad Energy forecasts that oil demand will peak by 2037, but increased technology efficiencies could accelerate this peak to 2027 in our low case forecast.

“If all discovered shale, onshore and offshore fields with breakeven oil prices below $60 per barrel are sanctioned per their current timelines, global production will meet and exceed Rystad Energy’s low case oil demand through 2031. Through their investment patterns, major operators appear to be taking steps to ready themselves for this risk,” Fitzsimmons remarked.

While some big oil companies have invested in renewable energy in recent years, renewable energy projects are for the most part still struggling to be cost competitive with their fossil fuel rivals.

“If Equinor and other renewable energy project operators are successful in driving down renewable production costs over the next decade, we may start to see a greater investment shift from fossil fuels to renewable energy,” Fitzsimmons said. “The high cash flows that majors have generated from increased shale investments will give them the financial flexibility to begin spending more in renewables once green technologies have matured.”

First, spending on shale and liquefied natural gas (LNG) is increasing proportionally for the majors. In the period 2001 to 2005, it constituted 10% of their total expenditures. By 2023 it will have grown to 30%, according to Rystad Energy’s forecasts.

“This means that majors will spend $200 billion more over the next five years on shale and LNG projects than they did just two decades ago,” Fitzsimmons said.

Second, oil and gas companies are taking a much more careful approach when investing in new assets to mitigate risk and boost paybacks.

Exploration and production companies (E&Ps) – which previously preferred to make large, long-term investments – now increasingly favor developing assets one phase at a time, allowing them to spread out investment decisions and their subsequent commitments.

“We already see this trend on the ground, as majors have shifted their focus from long-term offshore projects to phased shale investments,” Fitzsimmons remarked. “This strategy will allow them to manage the inherent uncertainty of the energy transition, maintain cash flow at almost record highs, and thus grant them the financial flexibility to move into renewables as soon as emerging green technology makes such a shift economically attractive.”