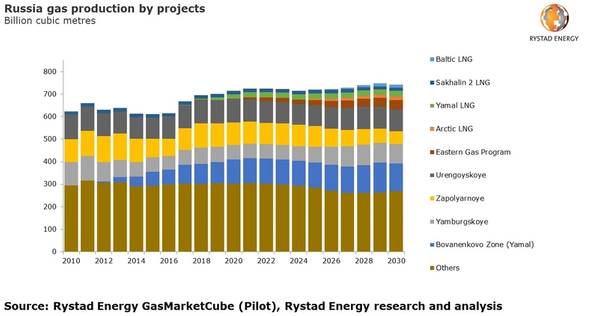 With gas supplies growing at a faster rate than domestic demand, Russia can increase pipeline and liquefied natural gas (LNG) exports to Europe, said a report.

Russia’s gas production has been steadily increasing since the low of 611 Bcm in 2015, and reached 695 Bcm in 2018, according to a report form Rystad Energy, an independent energy research and business intelligence company

Mature fields exhibit relatively high decline rates, but volumes from the recent start-ups and discoveries in Yamal, East Siberia and the Far East are expected to offset the decline. In 2018, Gazprom commissioned the third production facility at the Bovanenkovskoye field, increasing its plateau to 115 Bcm per year.

Russian domestic gas demand is expected to increase from a level of 430 Bcm in 2018 to slightly above 440 Bcm by 2030. In line with growing production, gas exports have also shown an increasing trend.

Last year Gazprom exported approximately 202 Bcm of gas with most of these volumes heading to Europe. By 2030, pipeline exports have the potential to reach 270 Bcm as Gazprom increases its export pipeline capacity to Europe, Asia and the Middle East.

To support strong export levels in the future, work is being carried out at a brisk rate on the Nord Stream 2 pipeline, which is currently more than 30% complete.

The new pipeline will add 55 Bcm of export capacity to Germany, but questions remain whether it will be used to increase overall exports or to divert transit gas from Ukraine to Nord Stream 2. However, Russia needs Ukraine in order to export higher volumes to Europe.