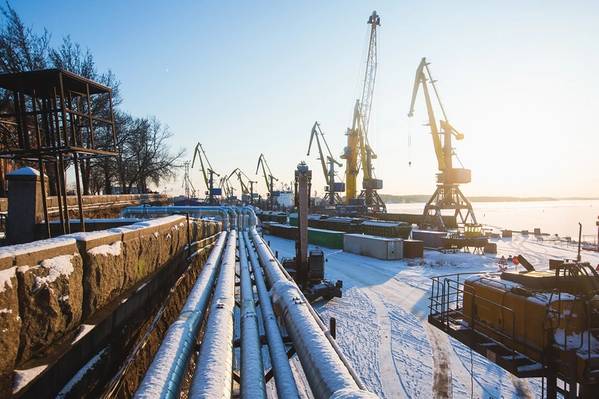 Storms, snow and freezing temperatures in Russia's northwest to the south have delayed some oil product exports but the fall in volumes so far has not been exceptional for the time of year, industry sources said on Thursday.

Products are mainly shipped from ports on the Baltic coast, Black Sea, Sea of Azov and the Far East. They are mostly transported by rail and pipelines, with small volumes travelling by truck.

Fuel oil loadings from the Russian Baltic were delayed by snow that caused disruptions to rail shipments to the ports, traders and sources in the rail and refining industry told Reuters.

In the south, storms delayed loadings in the Black Sea ports of Novorossiisk and Tuapse and the Sea of Azov port of Taman, they said.

Poor weather could result in a 10 percent fall in fuel oil loadings from Baltic ports in January compared to the initial plan, the sources said, adding that loadings of other products were not expected to face major disruption.

In the southern ports, about 8 to 10 percent of oil product shipments were likely to be disrupted, the sources said.

"We have permanent issues with oil product loadings now. Tankers are delayed due to the prolonged storms. Russian Railways is limiting the number of rail tank cars," a refining source working in the south said.

"We are flooded (with oil products), the only hope is for February when there is maintenance," the source said.

Maintenance reduces the output of products.

Russian Railways have approved only 60 to 70 percent of requests for oil product shipments to Novorossiisk and Tuapse, traders said, adding that it had also limited oil products shipments to Far East ports of Vanino, Nakhodka and Vladivostok.

Russian Railways told Reuters it was operating according to regulations, which says shipments can be limited if a route faces certain technical obstacles.

Russia's Association of Sea Ports said terminals in the Russian Baltic basin loaded 5.8 million tonnes of oil products in December, while the Black Sea and the Sea of Azov ports loaded another 4.4 million tonnes.

Traders said fluctuations in Russian oil product export volumes were not significant so far and they would be shipped in calmer weather.

"There is nothing catastrophic of course, there is a part of cargo positions moved from the end of January to the start of February," one of the traders said.