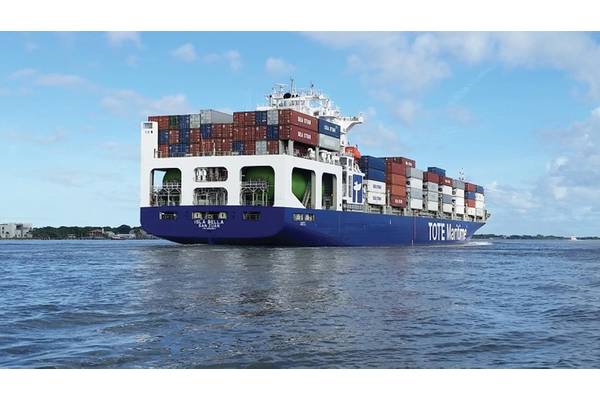 TOTE has three years under its belt of running containerships almost exclusively on LNG. (Photo: TOTE) 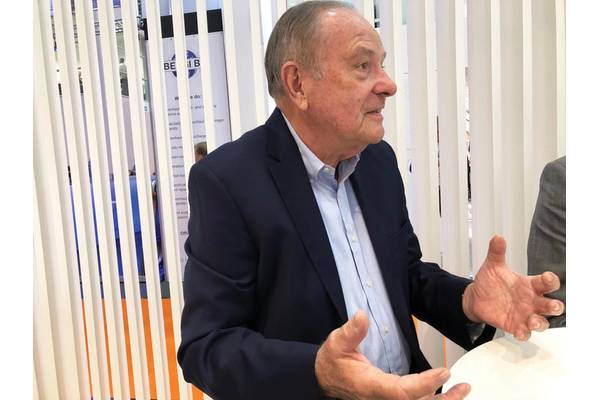 As the marine industry collectively struggles to find solutions to the mounting mandates to cut emissions, U.S. owner TOTE, which broke ground three years ago with the world’s first LNG-fueled containership, has more than 36 months experience operating almost exclusively on LNG. To date it has been a rousing success.

As environmental mandates for ships continue to get stricter, particularly with the new fuel rules and drastic reduction in sulfur emissions coming in 2020 and with ‘decarbonization’ now on the agenda courtesy of mandate from the International Maritime Organization, many vessel owners are at a crossroads as to the appropriate solution for both the environment and the bottom line.

Peter Keller, Executive Vice President, TOTE, who was pivotal in bringing from drawing board to service the world’s first LNG-fueled containership, sees the solution dead ahead: LNG.

“There are two things that are important: First, we all know that environmental regulation will become more stringent. LNG at that time (in 2012/13, when the decision was being made) – and still today – is the only viable, scalable, safe option,” said Keller. “Since Jones Act ships have a 35-year (or more) life span, projecting requirements and building a ship to that was a big concern. These ships operate 51 weeks per year, they have to make the voyages. We don’t have time to mess around with big retrofits.”

The second factor was the cost of the fuel: both the cost of LNG and uncertainty over the long-term price trajectory of other compliant fuels.

“When you look at LNG and contract for it on a long-term basis, the price of LNG is stable over time,” said Keller. “We inspired the building of liquefaction plants near our facilities, both in Tacoma and in Jacksonville. So we have a relatively fixed reservation fee, and a fixed cost on a barge, so the only fluctuation in our fuel cost is the Henry Hub, which is minimal. As a business person I have a pretty good idea of my fuel costs for the next 10 years. When you look at where the price of compliant fuel is going … is it going to be a 40% differential to crude, 50%? Who knows. I do know that my cost of LNG will be relatively stable.”

While the cost of LNG is stable, there are inherently additional CAPEX and OPEX on the ship itself. “With LNG you have a lot more sensors, you have a lot more safety equipment, a lot more alarms, a lot more IOs … our barge for example has 2500 IOs … in a 2200 cu. m. barge,” said Keller. But over the projected life of the ship, Keller said the case for LNG was strong and clear.

Experience on the Ships

“I don’t think most ship owners understand that this LNG technology has been running as long as it has in a purely commercial environment,” said Keller. “The LNG fueled ME-GI engine represents TOTE’s commitment to environmental stewardship. Importantly, LNG as a fuel eliminates SOx and particulate matter, significantly reduces NOx and –increasingly importantly – contributes to the reduction of greenhouse gases. This gives us the ability to move forward aggressively in terms of air quality which is especially important in the pristine areas of the Caribbean and Florida where our vessels operate.”

Keller said that the industry has two environmental problems: air quality and decarbonization. Regarding air quality, his answer is simple: “we’ve been working on it for decades, and today we have the answer: Liquefied Natural Gas.”

Decarbonization is not so simple.

“LNG will contribute to this by 15-25%, and that’s good, that’s a step toward the IMO targets of 2030 and 2050,” said Keller. “Does it get us there? No. But it gets us going in the right direction. We have to be very careful that we don’t allow one problem to supersede the other. We have to do both, we have to clean up the air; on the other side there is an issue with global warming, and we have to address that.”

“We’ve had three years of very successful operation of a full LNG ship, and not just the main engines but the auxiliaries too. The ships haven’t missed a stroke, they’ve been week in and out of Puerto Rico, on schedule and they are clean.”

Not only were the ships groundbreaking, the MAN ME-GI engines installed were the first in the world, so MAN Energy Solutions naturally had a vested interest to ensure success, as Wayne Jones, Chief Sales Officer and Member of the Executive Board, MAN Energy Solutions, explained. “In the lab and in the test bed, you’re comfortable, but the proof in the pudding is when you install it on a ship. What I think is significant about this project is from the boardroom to the engine room, there was great support. And I don’t think projects like this can work without that support.”

MAN Energy Solutions ME-GI (-Gas Injection) engine two-stroke propulsion engines are designed to provide ship owners and operators with a solution with two-stroke technology without the greenhouse emissions such as methane slip. “The development of the ME-GI engine is one element of what we call the ‘Maritime Energy Transition’,” said Jones. “Essentially it is our call to action to reduce emissions and establish natural gases as the fuels of choice in global shipping.” MAN Energy Solution has also developed an ME-LGI (-Liquid Gas Injection) dual-fuel engine that expands the company’s dual-fuel portfolio, enabling the use of more sustainable fuels such as methanol, ethanol and liquefied petroleum gas (LPG).

MAN Energy Solutions is the dominate player in powering the world fleet with reportedly more than 50% market share in the two stroke business. Still, Jones recounts long discussions in the boardroom in advance of its commitment to investing in the technologies to deliver innovative environmental solutions, as in additional to market and regulatory pressure, Jones and the company’s leaderships have to answer to shareholders, too. “To start you have to have some radical thinking within your own organization because you have to invest at a different level: we are investing 7% of our turnover in R&D … that’s a huge number,” said Jones.

In the case of the TOTE ships, the investment didn’t stop with R&D, as MAN placed its own people, from its service arm MAN PrimeServ, sailing onboard the ship for nearly 60% of the time to help ensure smooth operations and to serve as a resource if a problem arose. While Jones said today the selection of a dual fuel unit still requires an additional level of support versus a traditional diesel engine – perhaps 10% more – TOTE’s nearly flawless running of the ships and the MAN ME-GI units is helping to bring this closer to the norm.

TOTE’s Alaska division has also contracted MAN PrimeServ – MAN Energy Solutions’ after-sales division – to convert its ‘North Star’ and ‘Midnight Sun’ RoRos to dual-fuel operation on LNG. The vessels are both currently powered by 4 × MAN 58/64 engines and will be retrofitted to MAN 58/64 retrofit units.

While the technical side is now proven, Keller figures that an attitude shift is the key to truly driving change. “From when I started, if there was black smoke coming out of the C4’s at Port Elizabeth … ‘who cared?’ If it kept up for 5 or 10 minutes you’d get a call from across the street at headquarters, but it didn’t have near the sensitivity it does today. The change is a good thing,” Keller said. “As a company you have to do the right thing; today being environmentally appropriate is the right thing. Years ago if I had gone into a major big box retailer selling my wares as a company president and I went in with an environmental story, I would have been thrown out. Today, if I go to that same company and I do not have an environmental story, I’d be thrown out.”

Peter Keller, Executive Vice President, TOTE, arguably has more experience running ships with LNG fueled main engines than anyone in the world. For ship owners considering LNG fuel as an option, he offers this advice:

1. Relationship: “One of the things we’re very positive about is the relationship with MAN at all levels, from senior leadership to the support. We had our fits and starts from the start, but we always had great support from PrimeServ.”

2. Embed Early: “When we built these ships at NASSCO, we pre-assigned our chief engineers as the construction started. Our four chief engineers were all inspectors at the shipyard; they were there with the MAN representatives and the NASSCO people. From the very beginning we were all joined at the hip on this project to integrated this system on the ship. It kept us on good stead throughout the process.”

3. Fill ‘er Up (often): “We’re refilling on every voyage, even though we could do two voyages on one tank. The last thing you ever want to do with an LNG is take it all the way down, because then it’s going to heat up and you’re going to have to cool it down again.”

4. Communicate: “The number one issue for us was the relationship with the regulator and class, in this case ABS. Having them inside everything that you do every day is important. So many owners see their regulators and their class as almost enemies; you just can't do that."

5. Pipe it Right: “The cleanliness of LNG piping, the welding processes and the way that the gas is moved around inside the ship is really, really critical. We had a lot of issues is piping cleanliness, which is a shipyard issue.

As published in the October 2018 edition of Maritime Reporter & Engineering News.