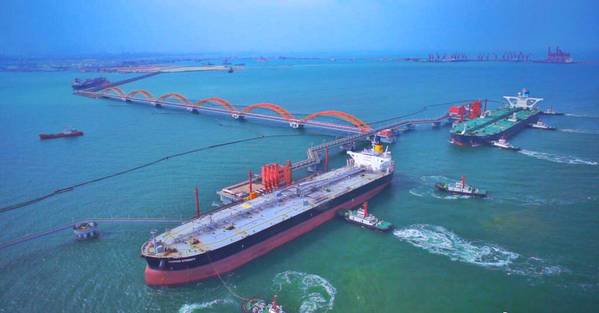 China's decision to remove crude oil from its latest tariff list in an escalating trade war with the United States was a relief to state oil firms prompted by a strong lobbying effort by main importer the Sinopec Group, Beijing-based oil sources said.

Dropping crude oil from the final tariff list on $16 billion in U.S. goods announced late on Wednesday underscores the growing importance of the United States as a key global producer and critical alternative supply source for top importer China, which is seeking to diversify its oil purchases.

Removing crude imports, worth roughly $8 billion annually based on Sinopec's earlier forecast of 300,000 barrels per day (bpd) for 2018, also gives Beijing room to maneuver in future negotiations with Washington, especially as it may soon lose some Iranian oil shipments due to reimposed U.S. sanctions.

"Sinopec did a lot of lobbying work with the government," said one person with direct knowledge of the state refiner's efforts to sway the policy decision of various agencies such as the Ministry of Finance and the Ministry of Commerce.

The revision came after Sinopec - Asia's largest refiner and biggest buyer of U.S. oil - suspended new bookings until at least October over worries that a 25 percent tariff would prohibit it from finding buyers in China.

The U.S. will be the single largest source of new oil supplies outside OPEC. It's in China's interest to diversify supplies," said a second source, a state oil trading manager.

The move could encourage Sinopec to bring in cargoes loaded in June and July, and resume new bookings, the sources said, declining to be named due to the sensitive nature of the topic.

"The issue for the Chinese is that any tariff on U.S. exports, (including) oil, will likely hurt their economy disproportionately because they have to import," said Kenneth Medlock, senior director of the Center for Energy Studies at Rice University's Baker Institute for Public Policy.

"U.S. exports will find a home regardless of how the global supply deck is reshuffled," Medlock said.

Although crude oil has been dropped off the list, refined fuels including propane, kerosene, diesel and lubricants are among the products due to be levied an additional 25 percent tax from August 23.

Propane will be the main item hit, with China's imports amounting to some $2 billion last year. Chinese imports of other refined fuels were negligible.

Dropping oil from the list could also be seen as a good-will concession that could help China win a waiver to keep buying Iranian oil even as U.S. President Donald Trump threatens to choke off Tehran's oil exports completely, analysts said.

China now takes in around 650,000 bpd of Iranian oil, trade worth roughly $15 billion a year. State oil giants China National Petroleum Corp (CNPC) and Sinopec have invested billions of dollars in Iranian oil fields, and have been importing their equity production.

But if the U.S.-China trade war is not scaled back, and Trump carries through threats of tariffs on $200 billion in Chinese goods, Beijing could put U.S. crude back on the list, the sources said.

"China's decision to drop crude may be an attempt to keep U.S. crude as leverage for potential negotiations," Michal Meidan of Energy Aspect wrote in a client note on Thursday.

But it could also just give Chinese buyers more time to bring in U.S. crude they have already bought, she said.