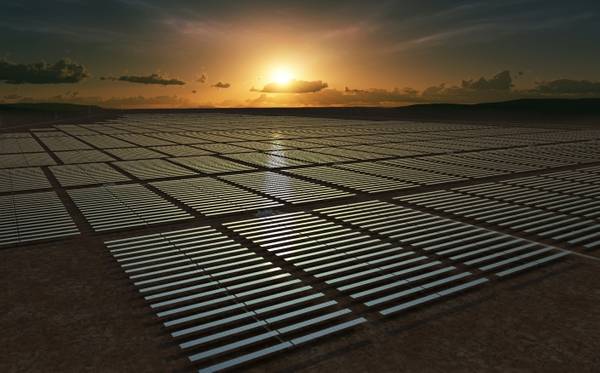 Photo: Total
Total's renewable energy unit said on Monday it had opened the world's largest solar-thermal hybrid plant in Burkina Faso, the first of what it hopes will be many projects supplying the African mining industry's growing need for power.
Total Eren and Africa-focused independent power producer AEMP inaugurated Essakane Solar over the weekend, adding 15 megawatts (MW) of solar capacity to an existing 57-MW heavy fuel oil power plant at Toronto-listed IAMGOLD's Essakane mine.
Christophe Fleurence, Total Eren's vice-president for business development in Africa, told Reuters the plan was to replicate this with other mining projects.
"It's gathering pace in terms of interest in all the discussions we've had with our contacts in the mining industry," Fleurence said. He declined to give details of potential future deals.
Mining companies operating in remote areas have long relied on thermal power plants, making their operations carbon-intensive and their costs vulnerable to fluctuations in world oil prices.
As the price of photovoltaic panels has dropped in recent years, several mining operations have added solar capacity to help cut power costs. However, most of those projects have been relatively small.
The Essakane plant, made up of nearly 130,000 solar panels, is expected to decrease the mine's fuel consumption by some 6 million litres per year and reduce CO2 emissions by around 18,500 tonnes per year.
The gold mine will buy the entirety of the plant's production via a 15-year power purchasing agreement signed with a special-purpose company in which Total Eren owns a 90 percent stake. AEMP, Total Eren's strategic partner for its industrial and mining business in Africa, holds the remaining 10 percent.
"We do see this as likely to be adopted more and more going forward," AEMP co-founder Richard Duffy said. "We talk to a number of mining companies. We have various projects in the pipeline - some of them not dissimilar to Essakane."
He said future projects were not at a stage where he could provide further details.
Bruised by pressure on oil prices in recent years and in search of new long-term revenue sources, France's Total has intensified its push into renewable energy.
It paid 237.5 million euros ($292 million) in September to acquire a 23 percent stake in solar and wind energy producer EREN RE, changing its name to Total Eren. It has a five-year option to acquire full control of the business.
Reporting by Joe Bavier
Login or Register to read full story
Categories: Environmental Energy Wind Power Renewable Energy