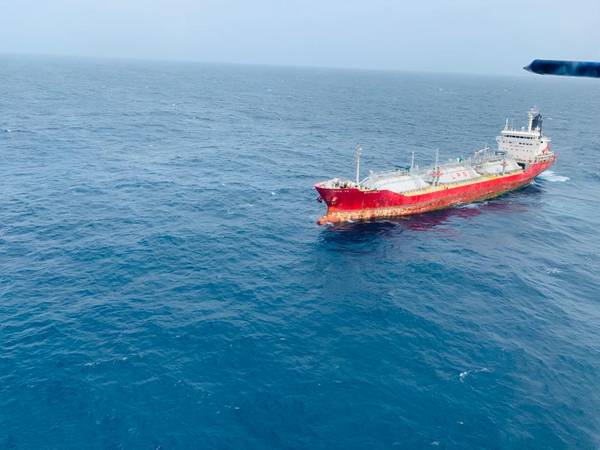 Indian oil and gas explorer ONGC said Monday it had, together with Coast Guard, helped avert a possible disaster relating to an empty LPG Tanker ‘Gas Yodla’ which went adrift after engine failure in the Arabian Sea on  July 24, 2021.

"At 6:35 PM on that day, the LPG tanker reported engine failure and started drifting in the Sea, around 20 nautical miles (nm) from ONGC’s D1 field," ONGC said.

The vessel, owned by Dubai-based Shield Marine, was on its way to Fujairah, UAE from Mongla, Bangladesh. There were 17 people were onboard the vessel, including eight Indians and nine Ukrainians.

"The efforts succeeded in assisting the distressed vessel and also helped keeping it away from ONGC’s operational area. ONGC also withdrew one of its Multi Supply Vessel (MSV) ‘Seamec-3’ and tugboat ‘Saroja Blessing’ from assigned duties and diverted those towards the drifting vessel. ‘Water Lilly’ tugboat from DG shipping also joined ONGC’s vessels," ONGC said.

"The path of the vessel was closely monitored to ensure safety of the passengers onboard and ONGC installations. By 10 PM on 24 July, the vessel cleared the south of the D1 field at 15 nm, but was still drifting at 1.5-2 nm per hour," ONGC said.

"ONGC remained in constant coordination with DG Shipping, Coast Guard and ODAG to ensure that the vessel remain at a safe distance from ONGC fields," ONGC said.

Coast Guard Ship ‘Sankalp’ approached the Gas Yodla by the morning of 25 July, and took over as on-scene commander – from ODAG Vessel ‘P R Nayak’.

The crew then successfully repaired the engine of MV Gas Yodla, and started its emergency generator by 5:15 AM on 25 July. MV ‘Garnet’ was then arranged by the owners for bunker support, ONGC said.

Following the discussion with the Coast Guard, the captain of the vessel agreed to it being towed. The vessel was secured to DG Shipping Tug ‘Water Lilly’. As the tow line of ‘Water Lilly’ parted, ONGC deployed ‘Sagar Pride’ which towed the vessel to safety Monday July 26, 2021.