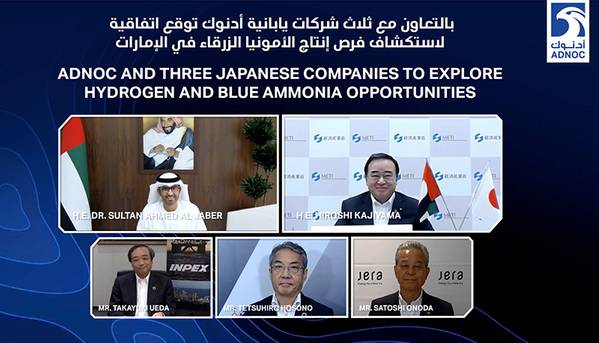 Inpex, Japan's biggest oil and gas company, JERA, Japan's biggest power generator, and state-run JOGMEC will work with ADNOC to study the commercial potential of producing and transporting ammonia to Japan, they said in a statement.

Ammonia is used for fertiliser and industrial materials, but is also seen as an effective future energy source, along with hydrogen. It does not emit carbon dioxide when burned, but its production produces emissions if it is made with fossil fuel.

The four companies plan to explore the feasibility of producing ammonia with a reduced carbon footprint from natural gas-derived hydrogen, with most of the CO2 emitted from the production of ammonia to be sequestered and utilized in enhanced oil recovery operations at Abu Dhabi onshore oil fields.

They aim to complete the joint study by November, a JERA spokesman said.

Japan has set a target to grow the nation's ammonia fuel demand to 3 million tonnes a year by 2030 from zero now and to create a new supply chain of the fuel in a bid to cut CO2 emissions and combat climate change.