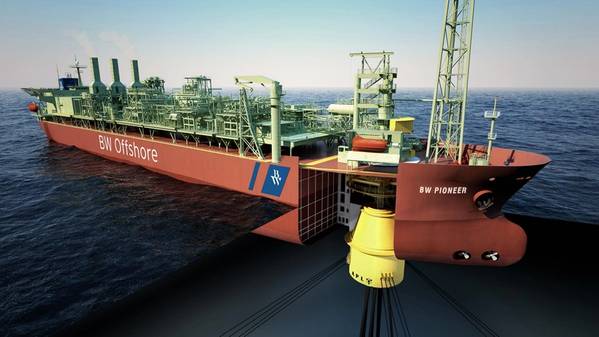 FPSO specialist BW Offshore has awarded NOV's APL a contract to supply a large submerged turret production (STP) system for the FPSO to be deployed at Santos' Barossa gas and condensate field located offshore of Australia.

The $3.6 billion Barossa development, sanctioned by Santos in March, consists of infield subsea infrastructure tied back to the centrally located FPSO.

The FPSO will process high-pressure reservoir fluids for gas export to the Darwin liquefied natural gas (LNG) facility via a 180-mile (290-kilometer) subsea pipeline for condensate storage and offloading.

The Barossa FPSO will be a new, purpose-built vessel equipped with an APL STP system, which provides permanent mooring and connection to subsea facilities. The FPSO is designed for a 25-year life of uninterrupted operation without drydocking. APL is part of NOV's Completion & Production Solutions business.

"Our STP system is a unique, innovative, and flexible turret mooring system for FPSOs. The system includes our STP swivel, which is designed for high pressures, temperature, and volumes, and the system transfers all fluids, signals, and power between the subsea system and the freely weathervaning production vessel," NOV said in a statement Monday.

Commenting on the award to ALP, Hans Hoegh-Omdal, Vice President, Turret, Mooring, & Surf Group for BW Offshore (BWO) said: "BWO has worked with APL on numerous FPSO projects over the years, the latest being our successful Catcher FPSO project. With APL’s first-class turret technology and our successful cooperation in the past, it was easy for BWO to turn to APL for their assistance for the Barossa project.”

Initial gas production from the FPSO is expected during the first half of 2025.